Key recommendations:
• the volume approach to permitted development should be replaced by an impact assessment, backed up by local development orders which LPA’s could use.
• where neighbours have no objections, the planning process could be “streamlined”
• mediation is suggested as a way to resolve planning issues.
• tree presevation orders (TPOs) should be time limited and allowed to lapse

Mark comments:
The government has just published a review of how home improvements should be administered in England and Wales. It’s called the Householder Development Consent Review and it’s 40 pages of well meaning waffle. That’s not quite fair. It’s actually very good at highlighting what the problems are at the moment, but it’s next to useless when it comes to providing solutions.

The problem stems from the fact that the current regulations were penned by Lewis Carroll for inclusion in an unpublished novel entitled Alice Makes Hay. We have various exotic instruments like Permitted Development Rights, Tree Preservation Orders, Building Regulations and Party Wall Acts. There is even something called a Lawful Development Certificate, which signifies to the proud owner that they can do something in their garden without having to apply for permission. You have to apply for a Lawful Development Certificate instead.

The various rules are so complex that not even experts understand them completely and there are tens of thousands of people gainfully employed trying to unravel them. In the last ten years, the number of planning applications for domestic improvements has doubled to around 340,000 per annum, and they now make up well over half the caseload of a typical planning department. Yet nearly 90% of these applications are passed, either first time or on appeal, so the review is right to wonder if there might be just a little room for streamlining. 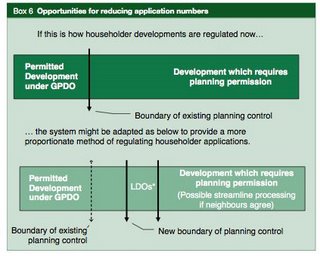 But that’s about as far as it goes. The diagram shown here is about as potent as it gets. LDO stands for Local Development Order, a bolt-on to PD Rights to be defined on an area-by-area basis by local planners. In other words, yet another set of rules, this time ones which change every five miles.

The review is full of calls for Plain English user guides but is itself a wonderful exercise in new-Labour obfustication. The text in the report is littered with meaningless phrases like fast-tracking, disseminating good practice, improving interfaces, reducing regulatory burdens and supporting culture changes. But when it comes down to the nitty-gritty, there is precious little meat in this sandwich. It manages to point out some of the absurdities that have grown up around the Permitted Development regulations, but suggests replacing the arbitrary volume rules with some sort of impact assessment. Just how this would work isn’t explained, but it seems to be based on the warm fuzzy group-hug approach to planning. If your neighbour doesn’t like the impact of your extension on their back garden, then it’ll be off to mediation for the pair of you. Let’s hope the Red Queen is not too busy.

So what could be done to improve matters? Here are my proposals.

1. Tree Preservation Orders. How can you “preserve” a living organism? TPOs are a nonsense. Scrap them.

2. The Party Wall Act. A nonsense. Scrap it.

3. Conservation Areas. A nonsense. Scrap them.

4. Listed buildings. A good idea that has now run way out of control. There are approaching 500,000 listed building in England, an absurd figure. This should be restricted to around a tenth as much, say 50,000. Nothing would be added to this list without something being taken off it. That would concentrate minds and it still leaves bucket loads of history for us to drool over in centuries to come.

5. Minor planning applications. If your neighbours can’t see it, hear it or smell it, then you should be able to do it. If they can, then let’s adopt the French system and appoint a mayor in each community who can act as the arbiter of good taste and neighbourly dispute. If you want to build, invite the mayor around for a drink and see where it goes from there.
Posted by Mark Brinkley