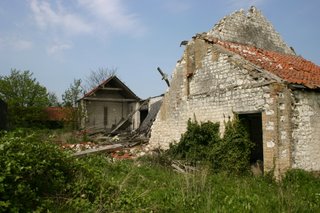 Last week I got a call from an anxious builder who had just completed the purchase of a derelict barn in Sussex. He had read in a previous edition of my book that there is a substantial financial risk involved in owning an unconverted barn with a valuable planning consent attached to it. The planning consent is only granted because the barn is deemed to be worth preserving; should the barn get flattened before the conversion takes place, then the planning permission would vanish into thin air. As unconverted barns in the south of England currently go for anywhere between £250k and £500k, that’s a lot of money to be risking. My anxious builder wanted to know where he could insure the risk.

I have done a little bit of phoning around and it’s a difficult but not impossible risk to insure. Most people just didn’t want to know but currently SelfBuild Zone said they could do something, though we didn’t get around to discussing pricing.

The week before I spoke with another guy to who had been almost bankrupted by an event like this. He bought a barn for conversion in Buckinghamshire and got into trouble when his builder took too much of it down. He knew the risk involved and so, supposedly, did his builder, but the builder miscalculated what he could get away with and a disgruntled neighbour shopped him to the local planning department who raced to the scene and declared the planning consent void. He had borrowed £250k against the unconverted barn and overnight it was rendered worthless. The planners were adamant that re-instatement was not a possibility. This guy was in deep trouble. What happened is that he subsequently applied to build a new house on the site; it took three years of negotiations and lots of lobbying. The planners were implacably opposed to a new house on unzoned land but the councillors on the planning committee, who have the final say, were so moved by his story and his desperate plight that they accepted his application. Common Sense 0 Compassion 1.

This set me thinking. The whole situation with barn conversions is quite ridiculous. They are in effect granted conditional planning permission, conditional on the nice old structure being preserved in a new format. But if logic were to apply here, even converted barns would be uninsurable because their very existence depends on preserving the old bits and, if the whole building were to burn down, there would be no case for re-instatement. This really is Alice in Wonderland stuff.

Presumably, local councils are encouraged to be pragmatic about it. At least, one hopes so. But it’s worth bearing in mind that the only reason we convert barns is because there is a dearth of nice rural building plots for sale and that is also the reason that these unconverted barns are so damned expensive to buy.
Posted by Mark Brinkley