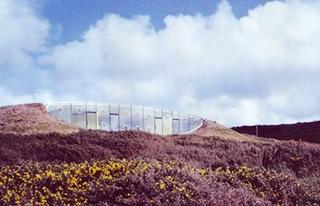 Why do architects have to be such snobs? They are always at it, so it would seem, deploring the “awful” and the “tasteless”, urging us to embrace wonderfully creative design and cutting-edge technology.

The latest to stick his head above the taste parapet is Jan Kaplicky, head of Future Systems, who are best known for the media centre at Lord’s cricket ground, otherwise known as “ET’s head”. Whilst his designs may be white-hot contemporary, his social attitudes sound like they have been lifted straight from "The Importance of Being Earnest."

Here’s what Kaplicky thinks of Britain in the 21st century (writing in The Quarterly, Autumn 2005)

• “Look at the rubbish you see on the train an hour from London: the land can’t be trashed with little boxes again and again.”

• “Who cares what dull repeats grace the hangers of M&S, when Armani and Galliano are creating cutting-edge designs.”

The stuff Kaplicky designs is fun, in an oh-so-clever, post-modern way. It’s also amazingly expensive and needs very wealthy clients to commission it. As such, I have no problems with it. I have seen his “House for a Wealthy Labour MP in Pembrokeshire” — pictured here and if you walk the Pembrokeshire coast path between Broadhaven and Nolton, or simply drive along the coast road, you can hardly miss it — and it’s truly an amazing site, especially in comparison to the very unprepossessing timber-clad shacks which are its neighbours. The locals refer to it as “The Teletubby House”: they can see the funny side of it.

Not so, Kaplicky. Just why does he have to be so pompous? I don’t hear classical musicians moaning about how awful pop music is, or poets complaining that the Sun is terribly badly written. If Kaplicky chooses to wear an Armani dressing gown in his multi-coloured greenhouse, good luck to him, but must he put down everyone who shops at M&S and lives in a “dreary box within an hour from London.” That just happens to be about 15 million people. I have no doubt that a couple of million of them, at least, would jump at the chance of living in a Future Systems house, but there are probably only a couple of hundred who could afford to. Maybe that’s Kaplicky’s real beef.
Posted by Mark Brinkley

Email ThisBlogThis!Share to TwitterShare to FacebookShare to Pinterest
Labels: Architects