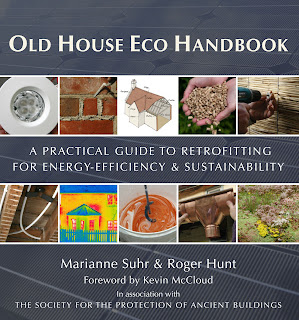 Marianne Suhr and Roger Hunt have written an important book at an important moment in the history of our treatment of our housing stock in the UK. They are attempting to meld two very distinct movements into one, and it’s not an easy marriage. It’s professional production values — it is a beautiful book — and it’s almost coffee-table aesthetic pull the reader into believing that this is a book of elegant answers, whereas the truth is that it’s actually full of uncomfortable questions.

The Old House bit is where both Marianne and Roger come from. In this instance, we are talking about the legacy of William Morris and in particular SPAB, the Society for the Protection of Ancient Buildings, who sponsored the book. Now SPAB was formed in 1877 and in its day it was undoubtedly radical: it was (I think) the first organisation to draw our attention to the value of the past and called on homeowners to stop knocking their homes about and start respecting what they already had. SPAB was a forerunner of the heritage movement, long before the National Trust existed and long before we started listing old buildings.

As heritage has become mainstream, SPAB has changed with the times. SPAB now spends much of its resources on education, dispensing invaluable advice on ancient building materials and techniques and gradually building up a pool of craftspeople who can work in ways sympathetic to old buildings. They have an affinity with natural building materials like lime, horsehair, hemp and wood wool, some of which were used by our forefathers and some of which weren’t.

Roll forward to today and we have a new challenge facing us, the need to retrofit our existing housing stock, the very stuff of the Green Deal. As the preface says: “How times have changed. Now eco-retrofitting buildings to make them more energy efficient and sustainable is seen as an integral part of repair and maintenance.”

One can only surmise what Morris would have made of “eco-retrofitting.” He railed against the “destructive restoration” practiced by contemporary homeowners and architects. Would he have been a climate change skeptic who would have protested against wind turbines and solar panels, not to mention double-glazing? Or would he have rallied to the greater cause and seen that the preservation of our climate was critical to the preservation of our built environment, and thus become an ardent eco-retrofitter? This uncomfortable dichotomy is still very much alive and sits at the heart of this book.

Essentially, to undertake an eco-retrofit we have to rank our actions in terms of overall importance. We have to face some very difficult questions:

• Is the aim of a retrofit simply to reduce carbon emissions? Or to save energy? They are not the same thing. A renewable heating system might tick the first box without altering the house fabric at all. But to save energy, you have to attack the fabric.

• How much can you attack the fabric an old building without altering its character? There is a danger that you will ruin the very soul of the house if you tamper with it too much. There is also a danger that, if you use the wrong materials, you might end up ruining the structure itself.

Marianne and Roger argue that using natural materials is the way forward, in that they are less likely to ruin an old house, less likely to cause interstitial condensation and will go much of the way towards saving energy.

But how much of this is based on sound building science, and how much is fashion? That’s another very difficult question which we don’t have an answer to yet. There are a number of references in the book to the importance of having breathing structures, but breathing in building terms is a frustratingly hard concept to pin down. They give (in Ch 3) a very good analysis of the way moisture interacts with building materials, both ancient and modern, and when you’ve finished it, you can’t help feeling that you are none the wiser. That’s not because their analysis is lacking, but because the whole subject is so damned slippery. We know all the many different ways that water interacts with buildings, but that’s not the same thing as knowing what will happen when, and in what order, or what damage, if any, will occur. Every building is unique and the way it behaves is unpredictable. The older the building, the more unpredictable it is likely to be.

Consequently, the advice given often falls a little short of what’s really needed in a handbook. It often falls into the trap of listing all the questions you should be asking, rather than providing answers. This criticism sounds mean and churlish and, if so, I should apologise, because it’s a trap I fall right into with my own book. I know many people look up to me as an expert on modern housebuilding, but just like Marianne and Roger, what I’m best at doing is pointing out how difficult it is to get it right.

I just think that renovating old houses is a far harder task than building new ones, so the lack of clarity is hardly surprising. I also know that SPAB is currently sponsoring a load of research into what actually happens when you undertake an eco retrofit, so that in time we should be able to be far more definitive about the subject. In the meantime, this handbook gives a very good summary of what we currently know and don’t know. Frankly, you’d be daft not to own it if you were about to undertake an Eco Renovation whatever age your house might be.