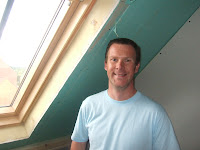 On Friday last week, I went to visit Robert Bagnall, the man behind the wonderful 127a Church Street selfbuild diary. It’s the most warts-n-all tale I’ve yet come across and I only hope that his subbies read it. Somehow I think not.

Robert has undertaken the full project management of this build and has undertaken a fair bit of the work himself. Although there are no ground breaking features which might excite TV shows or magazines, there are one or two details here that I hadn’t seen before and was interested to find out more about.

In particular, Robert has chosen to fit Roofblock which I have known about for years — I first wrote about it in 1999 — but have never seen used on site before. Roofblock originates from a civil engineer in Northern Ireland called Andrew Schofield who saw an opportunity to simplify a building detail — roof edges — and to also make a maintenance-free component by making it out of concrete. I believe it sells in reasonable numbers in Ireland but it’s struggled to make much of an impression in Britain. Perhaps because it doesn’t look quite right? Or maybe not? You be the judge. What did Robert make of it? Well here are his comments sent in an email to me in April, and reproduced here with his permission.

I’m surprised Roofblock isn’t used more widely. I can’t remember where or when I first heard of it, but I’m pretty sure I was aware of it before we started planning the build. I think your book clarified and put a name to what I’d seen previously – I certainly had an ‘oh, that’s what it’s called’ feeling when I’d read what you’d written about it.

To be honest, I didn’t cost the wood or PVCu alternatives as using a single simple block between the top of the brick/blockwork and roof seemed intrinsically attractive. The cost, when I saw it, seemed reasonable. If it has cost a tad more we’ll have saved in terms of not having to go up three storeys to replace fascias (or do I mean soffits? or do I mean bargeboards? whatever). However, the maintenance-free aspect of the Roofblock is, however, slightly compromised by having to put a length of 4x1 on top of the Roofblock, below the slates, in order to kick the bottom row of slates up. On the one hand, you can’t see the wood, which is aesthetically preferable, but may mean that I won’t have any cosmetic signs that the wood’s rotten before we get bird infestation between the SIP & the slates. On the other, it meant that I didn’t have to drill holes in the Roofblock to attach the guttering – I would have felt very silly if one of the blocks had broken.

The other attractive facet of using Roofblock was that the brickies could put it up themselves. And using SIPs for the roof meant that the chippies were almost redundant – apart from attaching roofplates and banging nails through the SIPs into the ridge beam and purlins we practically didn’t need a carpenter for that aspect of the build. (I’ve checked my final bill from the brickies to see how much labour cost and they’ve actually forgotten to charge for it separately – it wasn’t part of the plans when I got the original quote – so it’s just been absorbed under general brick & block work. The cost for the Roofblocks themselves was £1150 + VAT for about 45 linear metres of block).

I don’t have a lot to say about the product – it does exactly what it says on the tin – but the installation is worth a few comments. Whilst the brickies hadn’t seen Roofblock before they were familiar with similar products. Apparently there’s an estate in Bedford built with similar blocks which also carried the guttering within them (they seemed to imply it was actually enclosed within the block rather than obscured by the block, so look out for the estate with the water damaged brick...) There was some ambiguity from the plans about how the block went around the corners and we had to talk to Andrew Schofield to clarify. Quite a bit of cutting is necessary around the corners as, understandably, Roofblock aren’t going to make bespoke blocks for your exact roof pitch, making the free labour look even more attractive. 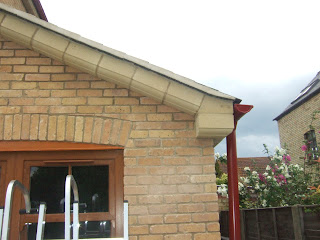 The mortar gaps between our blocks are, I think, quite wide and if anybody ever has the opportunity to look down the edge of them they’ll find they do wander about a bit. Not sure if the two are connected. From ground level it all looks fine (although, possibly, a bit bulky for some people’s taste). I’ve had a look at the Roofblock brochure to see if the blocks in the pictures are fitted flush to look like dressed blocks, but they have (thinner) mortar lines. Not sure if the nature of the block meant that it had to be that way or was the brickies’ preference. But, tellingly, we did end up with half a dozen or so blocks over.

My one criticism of Roofblock would be connected to the information they’ve produced. The plans they drew up with the quote were quite rough, and there are few specifics on how to get the block to join up with any unusual roof construction. (Compared to, say, the SIP roof panel manufacturer who had a whole online catalogue of plans and drawings of how to use them in almost any circumstance). I had to do my own plans to show the brickies how Roofblock & SIP married up which I got checked by the building inspector.

Overall, I’d use it again if it was in keeping with the design.
Posted by Mark Brinkley