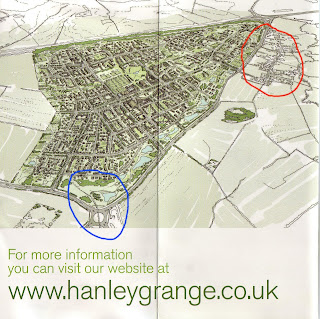 On Friday night, I went to Hinxton Village Hall to have a look at the roadshow put on by the sponsors of Hanley Grange, our local eco town. ‘Twas a grim little affair. There were two blokes, one in a jacket and tie, the other with open necked-shirt, who had been placed there to field questions and basically get it in the neck. A few residents came and went and stared grimly at what the powers-that-be had in store for them. One or two voiced their anguish, most remained silent, looking at the six or seven display panels which had been erected around the village hall. Hinxton is the village closest to the proposed site — I have outlined it in red on the brochure — and the fact that the scheme is being sponsored by Tesco just seemed to add insult to injury.

In fact so unpopular is the Hanley Grange proposal that I immediately started to feel sorry for the two guys put in there to answer questions — I sort of expected them to get lynched. I asked the guy in the open necked shirt whether they felt there was still a need for an eco town here, given that house prices are crashing and building sites suddenly seem as about as desirable as Anthrax dumps.

“Oh yes, we think so,” he answered. “There’s over 4,000 on the council house waiting list locally so we know there is demand, and even if the private market isn’t up to much, we can always build it out as social housing.”

That’s sure to make the proposals even more popular with the Aborginals of Hinxton. The numbers on the council house waiting list prove precisely nothing, as there is always going to be a demand for subsidised housing. The rationale behind the government’s housebuilding plans is that the demand for and price of new private housing can be used to siphon money into the subsidised sector, but the collapse of the new homes market has put pay to this ruse for the time being and, just possibly, for all time. I’m not sure the government realises this just yet, but sooner or later, it’s going to have to admit that this particular scam is now dead.

What caught my eye was just how rushed and ill-prepared the proposal is. There’s been no time for any of that fancy masterplanning, or for anyone to work out just what infrastructure might be needed to move people and goods into, out of and around the new town. They’ve just taken an aerial view of the site and drawn a motley collection of houses, shops, schools and green spaces, plus a couple of lakes, to give an artists impression of what an eco-town might look like which is, surprise surprise, just like any other new town that’s ever been designed and built. Accompanying it was a list of ten proposals which will make this town green but frankly it’s a list that any group of reasonably bright Year 11’s could have come up with in about 15 minutes. It just looks like someone has been told to plonk a small town down in some fields between Germaine Greer’s house and the McDonalds on the Pampisford roundabout. Which is exactly what this development is all about. No explanation of why this was such a good place to put a new town, or what made this preferable to any other green fields anywhere else in England. 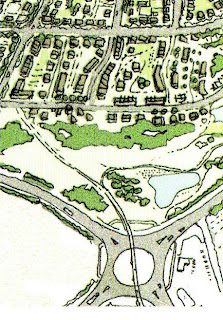 The Pampisford roundabout is an interesting case in point. It’s the bit I have circled in blue, at the northern end of the development, closest to Cambridge. This roundabout is already a noted bottleneck with cars queuing for up to twenty minutes to get through at peak times. And yet the only thing they have even deigned to do to improve matters here is to draw a cycle bridge across the top of it. Talk about greenwash. Can you envisage what it would really be like? It would be a great place for small boys to drop stones onto the stationary traffic below, or for potential suicides to contemplate their fate, cheered on by the appreciative customers of McDonalds. Which, come to think of it, would surely have to be transformed into something more healthy otherwise the eco town residents might be tempted to binge eat.

If you look at the plan even more closely, you can see that the entrances and exits to Hanley Grange are by way of five T-junctions onto the existing roads, neither of which is capable of handling the current amount of traffic. Not even a new roundabout is drawn in, just possibly because it might remind people that the residents at Hanley Grange may choose to have cars, and this would illustrate that the whole idea of building a sustainable community in a green field is a nonsense.

Around the back of the village hall, the protest group against Hanley Grange had set up a tent where they were gathering signatures. There I picked up a strong feeling of rural resentment against this sort of central government diktat. Apparently, of the fifteen proposed sites for eco towns, fourteen of them are in Tory constituencies. The only one that isn’t is Rossington near Doncaster which just happens to be in the constituency of Caroline Flint, the Housing Minister. Later this year the 15 sites are due to be pared down to 10: it’ll be interesting to see if Rossington gets through to the next round!
Posted by Mark Brinkley