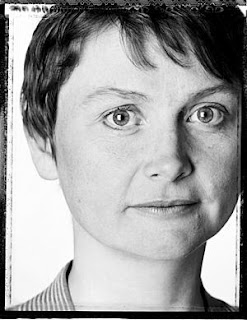 Having mumbled my way through more than my fair share of PowerPoint presentations, I am full of admiration for anyone who can talk clearly and coherently without slides or notes for fifteen minutes or more. Housing minister Yvette Cooper, in common with many politicians, can do this. Hats off to her. Furthermore, she projects herself as both business-like and personable, the sort of neighbour who’d be great to have around in a crisis. Run out of milk? No problem, you can borrow a pint from us. Feed the cat for the weekend? We’d be delighted: you know we like your cat almost as much as we like living next to you. Thanks Yvette, you’re a good mate.

But (and it’s a big but) being bright and on the button doesn’t make you right. At her exhibition opening address at Offsite 2007, she expanded on the twin aims of this government’s housing policy, these being to address the issues of affordability and sustainability. This is to be achieved by building more (lots more) sustainable and zero carbon homes, hopefully placing many of them into Eco Towns. This was music to the ears of the audience who comprised, for the most part, building professionals with a greenish tinge.

But (and it’s a big but), at the heart of this policy lies an inherent contradiction. “Yvette,” I wanted to ask, “Yvette, thanks for the milk the other night and all that but I’ve been thinking. How do you tackle carbon emissions by building more houses, even if they are carbon neutral? Where is the roadmap?”

Yvette doesn’t have a roadmap. She has the Barker report on her bedside table for those hot summer nights when the affairs of state get too much and she can’t sleep. Kate Barker has drawn a roadmap to account for affordability, which involves building more homes. Not that it’s a very detailed roadmap: had she taken a peek at what has just happened in Ireland, she might have come to a rather different conclusion. Ireland’s been having a massive housing boom and yet prices have been going up even faster than in the UK. Don’t tell Kate Barker, it might give her indigestion, and, lord knows, she doesn’t need that.

But the other aspiration, to reduce carbon emissions; they hadn’t even thought to ask Kate Barker about those and so she hadn’t put them into her roadmap. So what Yvette and her friends have decided to do is to press ahead with Kate’s ideas but to make all the new houses much much greener.

And that, dear reader, is basically the long and the short of this government’s housing policy.

But it’s still several slices of meat short of the full sandwich. The image kept jumping into my head of a car driver (probably me) attempting to press both the brake and the accelerator simultaneously. That’s what it amounts to. You don’t reduce carbon emissions by building more houses, however green: all this does is slow the rate of growth. And building homes has bugger all affect on affordability either, unless you are happy to wait about 35 years to see any change.

What we have, in effect, is a twin-pronged programme which will neither make houses more affordable nor reduce the emissions of the housing stock. What use is that?

“But what about the existing stock?” asked someone in the audience. “We’ve thought of that,” answered Yvette. But, when it came down to it, it turned out to be a work in progress, something they were paying close attention to and hoped to have some proposals on shortly. I’ve heard that before. It’s always easier to avoid this tricky little issue as it involves forcing people to carry out works to their own homes, which is never a very popular thing to do. Hmm. 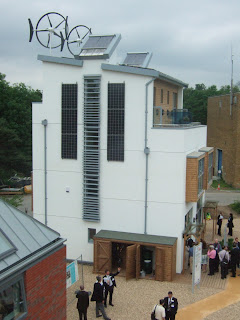 How much more fun to get you builders out there to concoct some really novel designs and thereby gently coerce an unwilling population into changing their ways. The image of a few wind turbines spinning around (or not) on rooftops is just so much sexier, don’t you think?
Posted by Mark Brinkley