Last week, I went to visit Snaplite, a company making downlighters, based just outside Birmingham. It’s an unusual outfit, which has carved a niche for itself by concentrating on quality. Whereas the lighting market generally is awash with incredibly cheap Asian imports, Snaplite have chosen to manufacture their products in the West Midlands and to concentrate on providing well-built housings for the various lamps out there.

The business is based largely around the skills of a guy called Peter Jones (not the tall one on Dragon’s Den) who likes to tinker around with lights in his garage. He hit on the idea of manufacturing fire-rated downlighters and Snaplite became the first company to offer these into the UK market in 1998. To date, they have been pitching themselves largely at professional housebuilders but now they are becoming interested in the selfbuild sector, which is how I came to be interviewing them, having met Anthony Ottway (pictured here with Graham Stevens) at the Homebuilding & Renovating show at the NEC in March, where they had taken stand space. 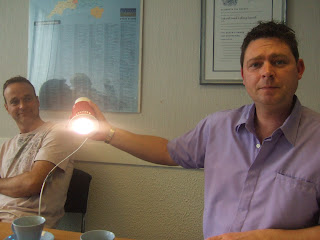 If you go back a few years, to the 1980s, downlighters were regarded as sophisticated and aspirational. Back then, the ceiling-mounted spotlight was still the thing. People did use downlighters in the home but not that often. That started to change when low-voltage halogen lamps became fashionable. People saw what they did in shops and in restaurants and instantly they wanted that same effect back in the home. An industry was born.

Not that this did our overall energy consumption any favours. Whilst low-voltage halogens are around twice as energy efficient as ordinary tungsten bulbs, you need a shed load of them to flood light a room. Instead of a modest house having perhaps 20 or 25 light central pendant fittings, a fully downlighted equivalent would probably use around 60 or 70, typically four in each small room and as many as ten in the main living areas. That’s an awful lot of lights. Anyone considering planning for energy efficiency would do well to bear that in mind.

But it’s another aspect of building homes which brought Snaplite to prominence and that is the problems associated with making holes in ceilings. In the early days of downlighting, no one gave a toss. It was all regarded as part of the fun of using downlights, just a detail to be undertaken as quickly and cleanly as possible. But holes in ceilings are not good news. Although the devastating effects of fire spread through ceiling holes and socket boxes had been known for some time, the fire regs had always ignored them, preferring to concentrate on testing wall and ceiling assemblies built without penetrations. But holes for downlighters not only increase the risk of fire spread, they also let through noise and condensation, and they are a source of air leakage. Additionally, because downlighters burn hot, you need to leave space in the ceiling recess around each light. That’s a whole catalogue of construction woe.

Rather than ignore these problemos, Snaplite hit on the wheeze of designing them out. It then hit on another wheeze of highlighting these problems to the housebuilding industry: their 1998 launch of the fire-rated downlighter made much of the problems raised by competitor products.

Then came interest from the acoustic wonks. When Part E, the sound regs, were beefed up in 2003, a very similar concern surfaced: holes in ceilings were really bad news for people wanting to acoustically separate flats. A fire rated downlighter turned out to work pretty well as an acoustic downlighter as well; not surprising really, because the issue is pretty much the same. The downlighter has to be re-engineered so that the heat is directed down as opposed to being allowed to dissipate in the ceiling void, and the housing around it has to be made from pressed steel and it has to be reasonably airtight. There is, in effect, an integral fire hood. If you do all that, as Snaplite did, then your fitting is pretty much bound to be fire proof, airtight and acoustically-rated.

So Snaplite has product which is fire rated (Part B), acoustically rated (Part E), doesn’t let condensation through (Part C), and is also airtight (Part L –airtightness requirements came into effect for the first time in 2006). Also because of the design of Snaplite’s downlighters, you could lay insulation across the back of them without having a break in the insulation. Competitor products required you to leave a large 600mm gap around the downlighter because they burned so hot. In an era where insulation was at last beginning to be taken seriously, leaving a hole that big made no sense.

Of course, a Snaplite downlighter wasn’t cheap, especially when compared to stuff flooding in from China, retailing for two or three quid. But for a while no other downlighters even tried to compete in quality, and they carved out a good market with the more scrupulous builders, egged on by both local authority building control and the NHBC who were impressed by Snaplite’s approach.

But these days, the competition is catching up. Snaplite are not the only show in town and wholesalers now stock various types of fire rated and acoustic rated downlighters at prices which undercut UK-made Snaplite’s output. Snaplite point out that the industry is full of sharks and that much of the so-called fire-rated kit on the market is nothing of the sort and that, furthermore, there is really no effective way of policing this situation. Their problem is that, having done all the hard work of establishing that ceiling penetrations are a problem, and engineering a solution, their market may be taken away from them by a bunch of cheapskates.

The solution is of course to innovate still further, to stay one step ahead of the game. To this end, they are courting the selfbuild market in the hope that here is a group of specifiers who may be prepared to pay a little more for quality. With the increasing interest in energy efficiency, many selfbuilders want help in designing a low energy lighting scheme that looks good and provides good quality light. They have launched a compact fluorescent range called Emerald, which is designed for ambient lighting in halls and stairwells, and they have added a range of low energy pendants, wall lights and illuminated mirrors so that they have a more rounded range, the sort of thing which a selfbuilder might think of as a one stop shop. LEDs are beginning to feature in this range as well, although to date mostly as shelf lighting and in strips.

Snaplite have also started offering a design service aimed at selfbuilders wanting both quality and energy efficiency. If you are looking at spending over £3,000 on a lighting scheme, which they argue is not an exorbitant amount for an upmarket house, Snaplite will undertake a design for you for £100, refunding £50 of this if and when an order gets placed. It’s an interesting proposition and one I can see may be attractive to a lot of selfbuilders.
Posted by Mark Brinkley