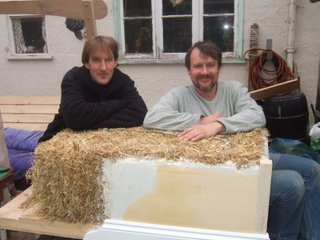 These two young men want to build houses out of straw. David Menell (pictured left) and John Ogle have started a business called Conscious Construction and they have a mission to make straw bale building mainstream. Or at least, a little more mainstream than it is right now. Which wouldn’t be difficult because there are only ten straw bale houses in the UK.

Thus far, if you want to know about straw bale building, you beat a path to the door of Barbara Jones, the diminutive dynamo behind Amazon Nails. Barbara learned about the technique in North America and brought her knowledge back to the UK where she has refined it and almost single-handedly driven it into the public consciousness. But her work is often community-based and is usually at the non-profit end of things. She is more teacher and guru than businesswoman.

John and David are approaching it from a different perspective and are hoping to move straw-bale building onto another level. Not surprisingly, they have learned about straw bale building techniques from Barbara and she is apparently keen to support their new venture. They want to develop straw bale as a viable alternative to rival other non-standard building systems, such as SIPs panels or ICFs (both of which have featured in the blog over the past few months).

I must admit I had never considered this to be a likely development before. Straw bale seemed just too….whacky. For a start, there are a whole bunch of fears to work through. Fire. Rodents. Moisture problems. Asthma. You name it, people worry about stuff like this. When you are investing your life savings into a house, you want to minimise your risk, not take part in some construction experiment. You need a comfort zone and straw bale ain’t there yet. But it’s also fair to say that it’s not that far off either. Amazon Nails’ pioneering work over the past 15 years has addressed all these issues and although the number of straw bale homes in the UK is still tiny, there are enough around to know that, as a technique, it works. And in North America and Denmark, there has been loads more development work carried out which further enhances the credentials of straw as a walling material.


And once you get past the fears, there are lots of things going for it as a building method. It’s cheap and abundant – it requires no manufacturing at all. The walls are wide – typically 450mm – but they provide good insulation and they can be easily made into interesting shapes. Covered with flexible lime renders, straw bale walls look fantastic. And they can accommodate all aspects of modern living like double-glazed sealed units and cabling. In many ways, straw bale has similarities with ICF construction but without having to use truck after truck of readymix. I can see that there is real potential here, but I can also see that unlocking that potential is going to be a long hard sell. Thanks to exposure on programmes like Grand Designs, there is an awareness that you can build structures using straw bales, but that’s still not quite the same thing as building your own home out of them. That’s still an option for the brave, but maybe, just maybe, it’ll move mainstream much quicker than might be expected. Maybe, just maybe, Conscious Construction have timing on their side.
Posted by Mark Brinkley