On the last day of October, I went to the National Physical Laboratory to interview Ray Williams. He runs the department that measures the thermal performance of materials and structures and, as such, he is probably Britain’s leading expert on measuring U-values. Despite having such an important job, at the cutting edge of building science, he had never before been interviewed by a journalist. “It’s a sign of the times,” he joked. I think he was delighted that someone was at last showing an interest in the work he does. 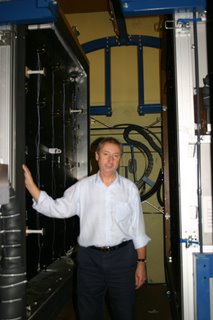 I wanted to talk to him about the multifoil debate, in which he has been deeply involved. But I also wanted to see how they go about their testing work and in particular just what a guarded hot box actually looks like. It is the industry standard equipment, used for measuring U values, and it has played a crucial role in our understanding of how building materials hold onto heat.

The hot box (pictured here with Ray inside) is a much bigger piece of kit than I had imagined. It’s about 3m tall and it weights 3.5 tonnes: it’s also a very expensive. Ray reckoned that it would cost around £300,000 to replicate it. Because of this, there are now very few of them around. He only knows of two others in the UK, both at the BBA test site.

“Anybody can build a simple hot box,” Ray told me, “but the results they get from it will be subject to a huge margin of error, so much so that the results are worth very little. Here we have been refining and developing the apparatus (which complies with BS EN ISO 8990) and the techniques for measuring heat transmission over many years. This is probably amongst the most accurate guarded hot boxes in the world but, even so, our best measurement uncertainty is still only about ± 4.5%. That’s a large measurement uncertainty for scientific testing. It shows just how difficult measuring heat transmission through structures is.”

Thermal performance testing of building products was pioneered in the 40s and 50s when scientists began to systematically study the thermal resistance of all kinds of materials for the first time. However, the evaluation of the insulation properties of building materials and structures was given a boost by the energy crisis that developed in the 70s. The Thermophysical Properties Group at the NPL was established in the late 1970’s, brought about by the need to verify the claims of the manufacturers of low density aerated concrete that the thermal performance of these new materials were actually superior to traditional concrete blocks. A more recent surge in demand for these services came when the 2002 revision to Part L of the Building Regulations set a low U-value criteria for windows, making double-glazing incorporating low-e glass almost mandatory. It was important for manufacturers to have the U-value of their windows measured using the procedures specified in a then new hot box measurement standard known as BS EN ISO 12567-1 and many of them came to the NPL to have these measurements carried out. A hot box measurement at the NPL cost around £2,500 and takes about a week. The NPL hot box can measure element up to 2m wide by 2m high and is fully rotatable, so that it can work vertically, horizontally or at any chosen angle, which is important when the test element contains air cavities.

The question I really wanted an answer to was this: “Just how good are hot boxes at indicating what goes on on site?” Ray Williams wasn’t really in a position to answer this, as he doesn’t carry out site tests, but he did point out that there was really no reason why a structure should perform better on site than it would in a hot box. Which brought us on to the subject of multifoils, of which he has tested quite a few. What struck me was that he wasn’t at all dismissive of them, which I had half expected, but was really interested in the whole debate and was keen to devise a test that might show multifoils off in a better light, if at all possible.

“I have had a number of multifoil manufacturers here talking to me and while some are quite prepared to accept that hot box testing is the best way of quantifying the thermal performance of their products, others are not. Some really seem to believe that multifoils behave differently in dynamic temperature situations than when tested with a constant temperature difference across them (as in hot plate and hot box measurements) but they don’t have any data to support those views. I keep getting results that indicate the thermal resistance of an air cavity insulated with a multifoil mounted centrally, is the equivalent of between 50mm and 80mm of mineral wool, but no more.”

It is partly these continuing negative results which have finally persuaded Local Authority Building Control and the NHBC to issue guidance to their members to only use thermal performance values obtained from hot box measurements, at least until further notice. Even so, Ray is still open to carrying out further tests. “Some multifoil manufacturers want me to test dynamically. Thus far, every test I have done in the hot box has been steady state. That is to say that we test for the heat loss of a wall or roof with a steady 20°C temperature drop across it; designed to mimic the difference between internal and external conditions in winter. A dynamic test, in contrast, would look at total heat transmission through an insulated structure over an extended time period whilst the temperature difference is being varied, just as you might expect in the course of a day. The BRE have carried some in situ (hence dynamic) measurements of walls insulated with multifoil insulation and those results were broadly in agreement with hot box results. The DTI have now funded a small project for NPL to look at identifying the best way to evaluate these kinds of products. I have already had extensive contacts with many people involved in this debate and I must soon decide how best I can help to resolve these issues. I am of a mind to include carrying out some dynamic testing, either in a hot box or a hot plate apparatus to see if I can determine if different insulation systems can behave significantly differently in those circumstances. But I am at a loss to explain just how it could give a markedly different result. Dynamic testing takes longer and it’s far harder to interpret the results, but in principle I don’t mind having a go.”

Whatever your feelings about multifoils — if you have any feelings at all that is — I find it reassuring to know that the government’s chief thermal performance tester is open-minded about trying alternative testing regimes. Because if, in the future, we want to address issues such as solar gain, quality of on-site workmanship, building anomalies and dynamic thermal performance, in a truly rigorous way, the guarded hot box apparatus is unlikely to be able to provide all the answers. But in the absence of any widely accepted and validated alternatives, it remains the best testing method for comparing products that we have for now. Whilst it is easy to see why a product might not perform as well on as it does in a lab test, it remains a puzzle as to how exactly it could be persuaded to improve.
Posted by Mark Brinkley