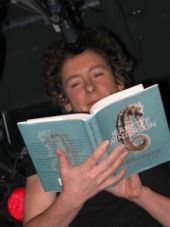 Jeanette Winterson is a very good writer. She hit the big time with her first novel, Oranges are not the Only Fruit, which won the Whitbread Prize in 1985 and went on to our TV screens five years later. I remember it. It was compulsive viewing. What does she write about? Wikipedia says her novels explore the boundaries of physicality and the imagination, gender polarities, and sexual identities. I’ll leave it at that.

But Jeanette also writes about other stuff that interests her and, in particular, she sometimes muses on property. An article on extending her thatched cottage which appeared in the Times last week is so bad that I couldn’t let it pass and have decided to award her with my first Eco Bollocks award for A1 rubbish written in the name of greening the planet. So Jeannette, I hope you don’t mind too much in collecting another award — you seem to have quite a few already.

Why has Jeanette been so honoured? She writes:

Any idiot can make a square out of breeze blocks — I know, I’ve done it myself. Yet breeze blocks are not just ugly, they produce huge amounts of carbon dioxide in their manufacture and require heavy cement mortars to hold them together. The things may be faced with stone or brick, but once your inner shell is made of cement blocks you might as well be in a concrete apartment in the former East Germany.

What a load of crap! Breeze blocks don’t produce huge amounts of carbon dioxide in manufacture. They may be ugly but then they are not designed to be seen so what difference does it make. If you are building an extension with a stone facing, as she appears to have done, living as she does in the Cotswolds, then concrete blocks are easily the most sensible way of building a structure. But no, she chose to do her walling in timber frame. Or, as she likes to call it, eco-timber.

Yes, this cost more, but even if you leave out the environmental pluses of using eco-timber and no cement, there were two further advantages: while the kit was being built elsewhere, the men were able to get on with renovating other parts of the house — so the process is economical on time.

Sounds like she has been spoon-fed some spiel by a very good salesman. Yes, timber frame can and sometimes does reduce the critical path. But not on a stone extension. Give us a break.

Just as good, and much to the disbelief of building regulations inspectors, we have achieved four times the required insulation (U-value) by packing the cavities with Tri-Iso Super 10, an insulating material that looks like layers of coloured Kleenex and shiny cooking foil. It is far superior to blown foam, and unlike using sheep’s wool you won’t find your whole house full of moths next spring.

Where does she get this stuff from? Building inspectors have just been told to no longer accept Tri-Iso Super 10 because it doesn’t do what it says on the tin. It only ever claimed to be as good as blown foam, not four times as good. And it has been unable to prove that it’s even half as good. As for the comments about sheeps wool….I am no particular fan of using sheeps wool as insulation because it’s bloody expensive but the comment about moths is bizarre. Especially from a woman who owns an organic food shop in London’s East End.

I have to say that building regulations make anything green or eco as difficult as possible. Most inspectors know little about green building, and mostly don’t seem interested in learning more. In the years and years that I have been renovating property, I have never met a single one who even wanted to talk about what we were trying to do, let alone offer any help or advice.

Here’s Jeanette on her ground source heat pump. This wonderful, simple idea, developed in Sweden, works like a fridge in reverse, and converts low-grade heat from the ground into high-grade heat for radiators and hot water. For every one kilowatt-hour (kWh) of electricity used to boost the earth-core temperature, 4 kWh are generated; in other words, you cut your carbon dioxide emissions and your heating bills by a whacking 75 per cent.

Actually, that’s fine until you reach the last bit about heating bills and CO2 emissions. Not even the most ebullient heat pump manufacturer (and there are lost of ebullient ones out there) would make such an outlandish claim. The true figures are subject to much debate but essentially there is very little difference between a really efficient gas or oil fired boiler and a ground source heat pump on either heating costs or carbon emissions. Search this blog for ground source heat pumps for a more detailed explanation.

So there you have it. This blog has launched into new territory by starting an award scheme. The Eco Bollocks award may not yet carry quite the cachet of the Whitbread or the Booker, but all awards schemes have to start somewhere. Anyone else fancy trotting out some complete tosh?
Posted by Mark Brinkley