During the past couple of weeks, I have been looking at new houses in Cambridge. The vast majority of new developments there are flats, which is fine if you have no kids or you are buying to let. But there are a few family homes which are, by and large, both incredibly expensive and incredibly tall. Four storeys seems to be the going height.

I don’t know about you, but I wouldn’t want to live in a four storey house. We once spent a week in a windmill in Norfolk and that was enough to convince me that multi-storey living is not something to aspire to. Yes, it may keep you fit but it’s also incredibly annoying when you have to traipse up and down all the time. 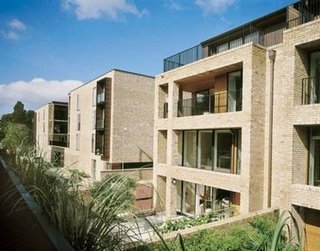 Pictured here is Countryside’s award winning Accordia development on Brooklands Avenue in Cambridge. These four storey semis are selling for just under £1million, for which you get bags of space, six bedrooms plus a garden about the size of half a tennis court and a studio over a double garage at the rear. The bedrooms are sandwiched on the middle floors with living space top and bottom. There are balconies and decking and lots of interesting sight lines but it’s not really a house I would want to live in. It would be like a re-run of the Norfolk windmill, only worse. Obviously the powers-that-be like it because it presses all the right sustainability buttons, but the housebuying public seem less enamoured because these big houses are not selling. I feel sure it’s the stairs.

On Monday, I saw another four-storey town house in central Cambridge at a development called The Greshams. Bit smaller than Accordia and a bit cheaper at £750k, but the same stair problem. They had built a sunken kitchen down at the bottom and they had a living room on the top floor “for the view.” You would spend your life going up and down three flights of stairs. 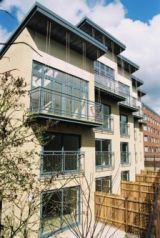 Can you imagine living in one of these with a toddler with a penchant for climbing stairs. You’d need six stair gates and you’d be forever going around opening and closing them. It would drive you bonkers.

And what about the elderly and infirm? How are they going to be accommodated in homes like these? Not that they don’t have level thresholds for wheelchair access, required by Part M of the building regs since 1999. At the Greshams, this level access enables you to visit just two rooms in your wheelchair, a downstairs loo and a small study next to the front door, probably amounting to no more than 10% of the floor plan. It makes a complete mockery of the concept of Lifetime Homes which was behind the introduction of Part M. These houses would have been far better reconfigured as single storey apartments, stretching across the terraces, rather than slicing through them vertically.
Posted by Mark Brinkley