Nuclear Power: why we have no choice 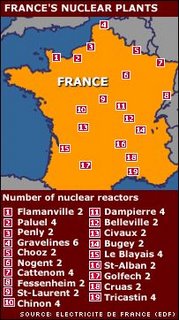 Here’s an interesting map. It’s taken off the BBC website and it indicates just where France has built all its nuclear power plants. Alone in the western world, France has embraced nuclear power. France now produces 80% of its electricity from nuclear. It also makes France by far the lowest CO2 emitter of the rich Western countries. Whilst the rest of the EU produces around 10 tonnes of C02 per person per annum, and the USA produces as much as 18 tonnes each, France is throwing off just 6 tonnes.

If my maths is right, they now have a total of 54 reactors at 19 different sites. The map doesn’t even include France’s nuclear reprocessing site at Cap de la Hague, on the Cherbourg peninsula, close to Flamanvillle (No 1 on the map). It’s also close to the Channel Islands and not that far from the Isle of Wight.

Whilst neighbouring countries debate whether to restart their nuclear programmes, France just steams ahead with hers, never having even paused for breath in the first place. There are four sites across the Channel which could affect us in the UK in the event of an accident. Belgium has two right on its borders and ultra-green Germany two more. German policy remains implacably opposed to any new nuclear power stations and, because of this, Germany won’t agree to an enhanced carbon offset trading scheme because it fears this would give ammunition to the pro-nuclear lobby.

But is Germany just showboating? In the absence of any means of influencing French policy and with two nuclear sites sitting just over the Rhine, downwind of Frankfurt, Cologne and Stuttgart, who are they kidding but themselves in pretending that they can opt for a nuclear-free future.

And isn’t it strange to reflect that there is no pan-European energy production policy? In its absence, France has effectively made everyone elses’ decision for them.

Over the next few years, as you watch the pro- and anti- nuclear lobbies tear bits out of each, arguing about frankly unquantifiable risks, just remember that the Channel isn’t very wide and that, short of invading France, we have no way of avoiding the nuclear option. We might just as well build our own and be done with.
Posted by Mark Brinkley