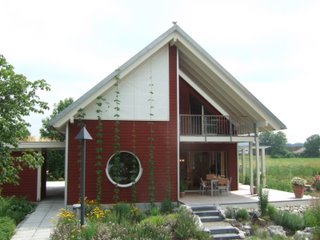 Last week I went on a rare expenses paid jolly to Germany. I was guest of Bavarian housebuilder Baufritz who, like many others in Germany, have watched Huf Haus blaze a trail into the UK selfbuild market and would like to do the same themselves.

There are something like a hundred fertighaus (factory house) companies in Germany, in the Huf Haus/Baufritz mould. They typically build a few hundred homes each year, similar in size to what several timber frame housebuilders do over here. The German businesses are also usually timber frame but it’s not timber frame as we know it in the UK. Here, we tend to supply just the timber skeleton, the superstructure, which then has to be finished on site. The Germans, by contrast, assemble most of the house, including internal and external wall finishes, in what is sometimes referred to as a closed-panel system.

To a visitor from the UK, the gleaming efficiency of the production lines is a site to behold. It’s reminiscent of car factories with wall and roof panels moving through assembly lines with a minimum of human intervention. If you want to read up more on it, there is a very funny description on the But She’s a Girl blogsite. Baufritz produce around 250 houses a year with a staff of 260, of which around 80 work in the factory and a further 60 work on site as erection crews. Work it out: it’s roughly one house per person per year. Say 1800 hours input. In the UK, you would expect to see between 3000 and 5000 hours work go into a traditionally-built house of similar size, and not that much less for a timber-frame one.

The reasons for this different approach are several.
• German’s pay high tax on overtime so there is an incentive to increase production from regular working hours.
• Germany hasn’t experienced the housing booms and busts that we have had in the UK. Consequently, German builders are confident enough to invest in manufacturing facilities.
• Unlike in the UK, Germans rarely seem to sell family companies and they tend to invest for the long term. Baufritz is a good example: it is owned and managed by the fourth generation of the Fritz family.
• The basic German house shape is simpler and less variable than its British equivalent. It lends itself to prefabrication.
• Planning permission for homes in rural districts is much easier to obtain in Germany and the selfbuild market is much larger, maybe ten times the size of the UK.
• Without wishing to resort to oversimplistic stereotypes, Germans seem to be naturally good at organisation, teamwork and manufacturing. In contrast, Brits are more inventive, more willing to experiment and quicker to embrace change. All these factors combine to explain why prefabrication has taken off in Germany but struggled in the UK, for it’s expensive to change horses when you have invested huge amounts of money on one particular method.

And there are elements of German housebuilding that are surprisingly conservative. Various innovations which have been widely taken up in British housebuilding have seemingly been ignored in Germany. Trussed roofs, engineered timber beams, precast concrete flooring: no sign of these in Germany, as far as I can work out. In fact, most fertighaus builders lay a wet concrete screed within the intermediate floor, just because that’s the way it has always been done, despite the fact that it stops the house erection process stone dead whilst the concrete dries.

Consequently, German housebuilders tend to be looked at as being much of a muchness. Very, very good at what they do, but a rather limited range. Huf Haus stand out because they have gone down a most unusual design route and have decided to build these iconic black wood and glass houses, designer conservatories for the minamalistically inclined. But how does the competion differentiate itself?

Well, Baufritz specialise in what they call the biological approach to homebuilding, as promoted by the IBN (Institut fur Baubiologie) in Neubeuern. If I can summarize just what it is Baufritz’s take on a healthy house is, it seems to be:
• avoid all products from the petro-chemical industry
• use only untreated timber (and lots of it)
• insulate with compressed wood shavings treated with whey (for fireproofing) and soda (as an insect repellent)
• rely on natural ventilation– avoiding mechanical ventilation systems
• shield against electro-magnetic radiation
• use radiant heating systems — both underfloor and in-wall

Their take on mechanical ventilation is certainly unconventional and puts them at odds with the Passive Haus movement, who promote ultra low energy housing in Germany. Not that a Baufritz house is a high energy burner: on the contrary, they seem to be building some of the best insulated homes I have ever seen. The biological builders approach is simply to monitor indoor air quality via a carbon dioxide detector and then to open a window if things look to be a little stuffy. They also don’t insist on extractor fans nor trickle vents, two of the banes of UK building regs. A Baufritz home doesn’t suffer from condensation - it’s simply too warm and well insulated.

The other really revealing technological aspect of their homebuilding is their using a specially-prepared plasterboard with a carbon skin which attracts and earths electro magnetic radiation. I have never seen nor heard of such a thing before. They take electrosmog very seriously and insist on getting radiation levels right down to trace levels, and have equipment on hand to prove it. Having written somewhat dismissively about the threat of electrosmog on this blog in June, I must admit that I am beginning to start getting worried about it!

The healthy house is a difficult call from a marketing point of view. Whilst no one would object to living in a healthy house, there is just a slight fear that paying good money for levels of protection not available in normal housing is verging on being paranoid. People may worry about microwave ovens and mobile phones, but not enough to stop using them and so they may well feel that buying a biological home is a bit weird. I asked the heavily-pregnant owner/manager, Dagmar Fritz, pictured, 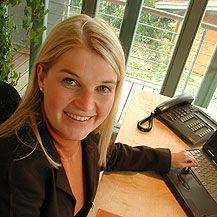 how many of their sales resulted specifically from customers demanding healthy homes and she admitted the number wasn’t that high. The reason they build biologically is because of a family commitment to the issue and Baufritz have established a unique reputation amongst German factory house builders and are now poised to see what the UK makes of their offerings.

It will be fascinating to find out. Oliver Rehm, a friend of Dagmar’s since student days, and a UK resident has gone into partnership with Baufritz to sell their houses into the British market. They have established an office in Cambridge are currently working through various technical approval issues. They don’t have any brochures or pattern books; everything is bespoke. Prices have yet to be finalised but expect a Baufritz house to cost something similar to a Huf Haus, that is to say around the £1500 per sq metre mark, making a four- bedroom, 2,000 sq m house £300,000. That puts it firmly at the upper end of the cost spectrum, and probably aims it at the prosperous South East corner of the country. Still, I can see them going well with people who admire the quality of German factory housebuilders and yet don’t want something quite as severe as Huf Haus.
Posted by Mark Brinkley