Bill Dunster is, for want of a better word, an ecotect. That is an architect with a passion for green design. He sprang to fame with a project known as BedZed, a development of live-work units built on a disused sewage farm in Beddington, South London. It’s had acres of publicity and is rightly held up as an exemplar of how multiple housing units should be built in the future. But BedZed has now been finished for three years and Dunster has found it a hard act to follow. Developers and social housing landlords have not been falling over each other to repeat “the experiment” and he has been frustrated by planners who haven’t been prepared to loosen the planning corset just because a scheme is green.

But at last, Dunster has another scheme to showcase his talent. This time it’s a four-storey block of key worker flats on the St Matthews council estate in Lambeth, South London. It’s not quite as big or prestigious as BedZed but in some ways it’s more technically advanced. Building carried a feature on it this week, which caught my eye: in particular, the wall detailing. The outer walls are no less than 550mm wide, compared with just under 300mm in conventional housing. They are made up of 150mm blockwork inside 300mm of expanded polystyrene insulation filling the cavity, behind a 100mm brick skin, which is what them outside world sees. The plus point is of course that, with this much insulation, you have got a tremendously low U value – reckoned to be just 0.1W/K/m2. But against this, on a 60m2 apartment, you are loosing up to 25% of the footprint to walling.

Yikes. That’s a hell of a lot, especially considering we are being encouraged to build smaller and smaller units. Dunster is a big fan of heavy mass construction, which means little or no timber frame and little or no off-site pre-fabrication. He believes in the importance of thermal mass (concrete in other words) in regulating the temperature characteristics of a home and in reducing the effects of summer over-heating. But is thermal mass really such a wonderful concept that you have to loose 20% or more of your floor area just to accommodate it? If there wasn’t quite so much south-facing glazing — another of his betes verts — then perhaps the designs wouldn’t require quite so much thermal mass and the walls wouldn't have to be quite so thick. 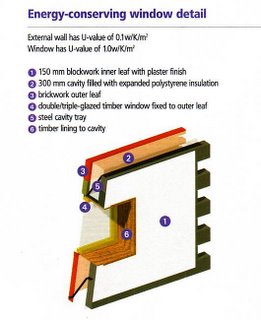 Another problem comes with the adoption of a 300mm cavity, shown here in diagramatic form, (ref Building magazine). How do you manage the openings? In particular, how do you ensure that the water penetrating the outer brickwork is directed back out of the external wall rather than dripping down into the joinery? You’ve left the world of conventional construction far behind here: there are no off-the-peg wall ties this long and there are no pre-formed cavity trays this wide. Dunster’s solution has been to design a wrap-around cavity tray around each window. To me, it sounds just like the sort of detail which is likely to fall victim to sloppiness on site. Done perfectly, there should never be any problem but construction isn’t a perfect world.

One other feature of this article stands out. The costings. £1600/m2. This isn’t, in fact, far out of line with many other innovative social housing projects being built around the country at the moment, but it’s about twice the rate that selfbuilders hope to complete their projects for. Why the huge discrepancy? A good question, which will have to wait for another blog.
Posted by Mark Brinkley