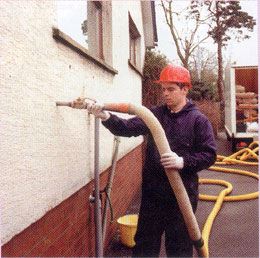 Jeff Howell, the Sunday Telegraph’s resident builder, writes this week on the vexed subject of cavity wall insulation. Jeff is firmly in the non-believer camp: he reckons that cavities, if built empty, should be left empty because the original intention behind a cavity was to stop water penetrating from the external brick cladding through to the house. Well, that is what the cavity wall designers would have us believe.

But my researches tell me that the reason for the widespread adoption of the cavity wall design in the 1920s and 30s was nothing to do with builders wanting to improve construction standards. No, it was down to cost and speed. It was (and remains) much quicker and cheaper to build a single skin of brickwork separated by a cavity from a single skin of blockwork, than to build a double thickness brick-only wall, the way Victorians and Edwardians built brick houses. In today’s money, it costs around £50 per m2 to build a single skin of brickwork, about £20 per m2 to build a block wall, thus around £70 per m2 to combine the two around a cavity. In comparison, a solid double-skin brick wall is going to cost close to double a single skin one, i.e. £100 per m2. It’s a no-brainer. If you were a 1930s housebuilder, you would switch to cavity walls, and tell your customers you were doing it for their benefit.

What’s remarkable about the whole cavity wall story is just how useless the cavity has been. It’s only marginally better at keeping rain out of a house than solid brickwork. It seems to make little difference whether it gets filled with insulation or not. Wider cavities perform better than narrower ones and failure rates are highest where the rain falls the most: neither of these facts will startle you.

The question, which exercises Jeff so much, is whether you should or shouldn’t inject insulation into an empty cavity. The government is all in favour as it’s one simple and cost effective way of reducing carbon emissions. And there are tempting grants available for you to do this. Check out the Energy Savings Trust website . Jeff reckons it causes problems elsewhere, specifically making damp penetration problems more likely. His evidence is sketchy at best: he claims that he gets a bulging postbag when he writes on the subject from people who have suffered penetrating damp and condensation problems since having their cavities injected.

Jeff has a more specific beef than just compromising the cavity. He reckons that cavity wall installers’ favourite material is mineral wool because it’s cheap and it’s very quick to blow in. In fact, he writes that gangs can do five houses a day. And he also claims that the job is often rather poorly carried out. At five houses a day, I can quite believe that. This leads to a problem with voids, where they have missed bits of the cavity out, and slumping, where the mineral wool fails to hold its position. Both these will lead to cold spots. In fact work by Kingspan, the Irish insulation manufacturer, supports these claims. They have undertaken various thermographic studies that highlight the prevalence of cold spots inside cavities.

Now Jeff reckons that these cold spots are likely to cause condensation inside the house. I think he’s wrong. He writes because the house is now better insulated, the internal temperature can rise and with it, relative humidity. This means wall areas that are slightly cooler than the rest can be subject to condensation and black mould, which can give the impression of penetrating dampness.

I'm not convinced this is correct. Condensation requires temperatures to fall below a dew point: in most modern homes, that dew point is around 12°C. It varies with the relative humidity levels but in most homes in winter the internal temperature is kept at around 20°C and the relative humidity sits at between 50% and 60%. This air: moisture mix hits its dew point at 12°C. Now increasing the temperature doesn’t of itself increase relative humidity: in fact, without adding more moisture, it does the reverse. It certainly doesn’t affect the dew point temperature. If you leave a room unheated and the temperature falls below 12°C, you will find condensation forming on the coldest surface, which is often the window. If there is a cold spot in the wall, maybe where the cavity wall installers have missed a bit, then, yes, there is every chance that condensation will form next to it. But it is not the cavity wall insulation that is causing the problem, it’s the low internal temperature. In fact, cavity wall insulation should improve the situation because the room temperature will stay higher for longer, because the heat loss characteristics of the room have been improved.

So what’s my advice regarding cavity wall insulation? I say, go for it. If the installers reckon it’s OK, then I really can’t see what the problem is. And if it’s not installed perfectly, it is still better than nothing. But I do agree with Jeff on one thing. I think mineral wool is the worst option for this work: I’d go for polystyrene beads, everytime.
Posted by Mark Brinkley