What’s Belgium got to teach us about housebuilding? 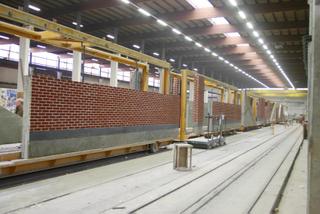 To British students of modern manufacturing methods, Danilith are known (if they are known at all) as the Belgian housebuilders with the robot bricklayers. But that is only a small part of the story. For Danilith is a vertically integrated housebuilder of the type that just doesn’t exist in the UK. They are a family business that has been running since the 1920s and they own a large plant in Wortegem, which they use to build as much of their houses as they possibly can. Not only do they prefabricate wall, floor and roof panels, but they make their own joinery as well. They employ 260 people, use very few subcontractors and they undertake around 250 projects a year, mostly individual homes in Belgium and Holland, mostly fully finished.

Let’s just consider this last sentence. 250 houses built each year by 260 people. That, in itself, is remarkable. No one at Danilith works more than an 1800hour year if they can help it — Belgian overtime is very heavily taxed so there is an incentive to stick to the contracted hours. Of these 260 employees, just 30 work in the factory, another 100 on site erecting and finishing the houses and the remainder in various admin roles. So essentially, 130 workers are building over 200 houses each year. That’s just under 1200 hours labour going into each house. In comparison, the standard British site-built home takes 3000 hours to construct. Danilith workers are thus over twice as productive as their UK equivalents.

This is reflected in the prices charged for Danilith’s homes. Their brochure shows that the selling price is almost always under €1,000 per sq m (£690/m2). But in Belgium, new homes attract VAT at 21%, which is included in this figure. It also includes 4% taken for design fees and a mandatory 1% fee payable to a private security firm to oversee the construction sites. The net sales price is in fact just €800 per sq m (£550/m2). It’s difficult to see something of equivalent quality in the UK costing less than £900 per sq m. In fact most MMC advocates say that you can’t build at less than £1,000 per sq m unless you are constructing identikit houses in long production runs. But Danilith’s homes are all different, although the elements used to put them together are modular.

In so doing, Danilith produce a very high quality house. We are used to seeing timber and steel framed houses built in factories but Danilith work mostly with brick and concrete, reflecting the prevailing preferences in the Benelux countries and France. The 10metre-long wall panels passing through the Danilith plant are not unique: in Germany, basements are commonly constructed with prefabricated walls. But Danilith have added to this a robotic brick laying machine which first slices the bricks in two lengthwise and then lays them face down on a flat bed, against some retardant paper. Mortar is subsequently brushed into the joints from above before three more layers, concrete, polyisocyanurate insulation board and lightweight concrete are added to the beds, the whole process taking around four days to cure and the final wall thickness being around 250mm. Finally, the walls are hoisted vertically, to be finished by hand on the last of the production lines. Windows, doors, electrical channels and plumbing runs are all set into the walls as they are being constructed. You can view the 15 stage process on the website www.milbank-danilith.co.uk. Floor panels are constructed elsewhere in the plant. Roughly a house a day passes through the plant: on a traditional British building site this would represent the efforts of around 600 hours work. In the Danilith factory, it’s 25 workers on an 8-hour shift: 200 hours. Plus, of course, a lot of investment in machinery and forty years worth of know-how.

The technology used by Danilith is far from hi-tech. It’s the sort of thing that is used on production lines across the globe. Parts of the process are still carried out by hand and compared to the latest robot car builders it all looks a little primitive. And there are many other smallish housebuilding businesses in Germany and Scandinavia using similar finished-panel systems. However, in the UK, the nearest we come to factory production in housing are the numerous timber frame companies who semi-fabricate wall and floor panels, sometimes referred to as open panel building. This requires insulation, services and finishing on site, both internally and externally.

Danilith see themselves as custom homebuilders first and foremost. Although they make windows and staircases, as well as the wall panels, they don’t sell them to third parties; they only supply their own projects. However, they do undertake a little spec. building from time to time but usually to fill gaps in the production schedule that would otherwise have them laying off staff. This is quite revealing in itself. It’s frankly hard to imagine a British firm adopting such an attitude. Indeed, it’s just the sort of action that shows the gulf between Anglo-Saxon and Continental business practice. Whilst we are busy cutting costs and growing market share, the Belgians are putting the interests of their workforce first and foremost. Whilst many British economists would highlight Danilith’s working practices as being a prime example of Eurozone featherbedding, they would also have to admit that it’s resulted in productivity levels which we in the UK can only aspire to some time in the not-so-near future. The Belgians are clearly doing something right.

This remarkable company would like to transfer some of its know-how to Britain. They have found a willing partner in Milbank, who, like Danilith, area a family-run company with a keen interest in masonry prefabrication. Milbank are big in precast flooring in South East England and have slowly grown their business to embrace haulage and joinery. But they are not housebuilders. Both Milbank and Danilith are keen to start building homes in the UK but there are significant obstacles to overcome in order to establish a British version of Danilith.

Perhaps the biggest problem is that there simply is no tradition of custom home building in the UK. On most of the continent, custom home building is the principal route by which detached houses are built. Individuals buy plots — relatively cheaply — and commission a new house to be built on them, without spending a great deal of time working on the project themselves. In Britain, the new homes market is dominated by speculative builders who build solely for sale: there are around 15,000 individual homes built each year but most of these are taken on on a semi-DIY basis with the selfbuilders acting as their own contractors. The burgeoning timber frame sector prefers to offer a water-tight shell option and lets the selfbuilders finish the houses off in their own time. One or two Continental companies offer a full-build service, notably Huf Haus and the Swedish House Company, but they only account for a tiny number of new homes each year, probably under 100 in total.

Typical of Continental custom homebuilders, Danilith is set up to build one-offs. Everything in the Danilith system is modular but provided the design fits the modules, almost any design can be built. They don’t aim to achieve economies of scale by mass production: their goal is to simplify everything down to a set number of options and to avoid prototyping. That way they avoid mistakes and they keep costs to a minimum, without becoming too repetitive.

Quite why the major British housebuilders have failed to take up factory-building Danilith-style is a mystery. Their pattern book approach to housebuilding, combined with the guaranteed volumes, ought to lend itself to prefabrication. But for some reason vertical integration has never appealed to British builders and no one has ever seen fit to try. The only plc housebuilder to currently use a significant input of prefabrication is Westbury, who have built the largest timber frame plant in Europe (Space 4) to supply some of their new homes. But Space 4 is a long way short of what the likes of Danilith and Huf Haus do.

The big question is this. Can the cost savings shown by Danilith be achieved simply by copying the technology or is the different business culture an essential part of the mix? Whilst it ought to be easy to introduce robot bricklayers, it will be much harder to integrate the Continental work ethic needed to keep the robots ticking over.
Posted by Mark Brinkley