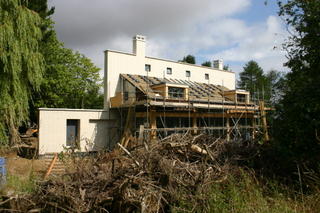 Friday morning, drive down to Thaxted to see how David Birkbeck’s new house is coming along. David was the first editor to hire my keyboard, back in 1996, and now he runs a consultancy called Design For Homes which sets out to get housebuilders to hire architects. He is in the middle of his first selfbuild and I have been following the story ever since he first put an offer in on the plot. The house is, naturally, very designey: the architects are Snell David. I was last here in January when the extraordinary spine wall was taking shape with these unusual blocks, which are glue-mortared.

Now the house has taken shape around it and it’s a magnificent structure. It’s a magnificent site, which helps matters; a sort of woodland glade with a large pond and the house has large glazed panels looking out over the pond. If I was feeling critical – and I’m not today – I could say that it suffers from being an architect-driven project, which is overly complex and unnecessarily fussy. But on this balmy August day, it just looks very cool and comforting and, indeed, just a little inspiring. David isn't on site but he speaks to me over the phone and enthuses about the whole structure being both very modern yet very Essex. I think he's referring to the timber wall panels but even these turn out to be something unusual, in this case Thermawood, a heat treated softwood which should last decades, "unlike all that nasty cedar," he says "which is already beginning to look tatty." David can be very funny; whilst he works as a champion of good house design, this doesn't mean he champions ALL new house design.

Like most selfbuilds, this house seems to be being assembled by all kinds of odd people. I am met and tea-ed by Clare’s brother who is about to become a primary school teacher. Upstairs are two lads who normally work as exhibition display builders: they are putting Sasmox building board in place on the many studwork partitions. This is a non-traditional skill if ever: no one here has ever worked with Sasmox before. It’s heavy and a little fragile but it doesn’t need finishing, unlike plasterboard.

The scaffolding is about to be struck and David says he hopes to be in within “a few weeks.” Having knocked about the selfbuild scene for many years, I should know that this is wildly optimistic but sometimes you can’t help but be dragged along by all the optimism.
Posted by Mark Brinkley