I spent the weekend working at the Homebuilding & Renovating show at London's Excel centre. By way of relaxation, I often walk the neighbourhoods surrounding these venues both before and after showtimes. Excel is situated next to the Royal Victoria Dock in the heart of London's East End and co-incidenatlly, very close to the site of Ronan Point, the ill-feted tower block which partially collapsed shortly after it was completed in 1968. 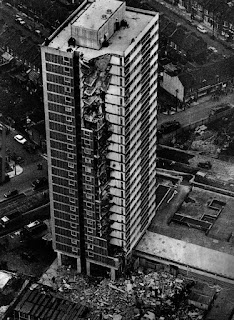 The story of Ronan Point has been well documented and there is much on the web about it all. Five people died after a resident attempted to light her gas stove early one morning and instead caused a gas explosion which blew out her kitchen wall and this caused all the kitchens above and below hers to collapse. Whilst the number of deaths was a tragedy for all concerned, this part of London had been well used to explosions having been witness to some of the most intense bombing in the Blitz, not to mention the largest explosion ever to be recorded in London at the Silvertown TNT plant in 1917.

The Ronan Point collapse is remembered now not for its death toll but for the way it marked a turning point in the history of housing in the UK. The 1950s and 60s were a time when Britain went a-housebuilding in a way that has never been seen before or since. Many of the big cities were still bomb damaged after WWII and what remained undamaged was in very poor condition and was widely regarded as little more than slum dwellings. So London's East End was being cleared of existing Victorian housing stock and grandiose schemes of cities in the sky were being enacted. Corbusier's dream of tower block living was coming to fruition here in Canning Town.

However, the dream and the reality turned out to be poles apart. By 1968, tower blocks were being thrown up in record time using pre-fabricated walling systems and, as it later transpired, very low build standards. Only when the boffins came to examine Ronan Point after the explosion did they realise just how poorly these blocks were built, and that it was surprising that more didn't suffer a collapse similar to Ronan Point. Part A of the building regs was in large part re-written because of what was learned from Ronan Point.

The disaster marked a turning point in the story of the slum clearance policies and council house replacements, as well as sounding the death knell for council tower blocks. The dream died with the collapse of Ronan Point. The enthusiasm and vision of a brave new world, built high in the sky, was quietly abandoned with the realisation that this was no way to house people. When the entire Freemasons Estate (9 identical tower blocks of which Ronan Point was one) was eventually demolished in the 1980's, it was pointedly replaced by low rise terraced housing, built by Barratts.

Only now, in the 2010s, has tower block building returned to fashion. The Docklands Light Railway which cuts through this area is now a great vantage point from which to witness the return of high rise flats in this part of London. Let's hope it ends rather better this time than it did in Canning Town in 1968.

I was intrigued to see what evidence of Ronan Point there is today so I went exploring along Butchers Road, E16, to see if there is any indication what happened there one May morning nearly 50 years ago. Alas, there is no plaque, no memorial, not even a storyboard to explain the significance of this place to residents and visitors. It's an important piece of our history and it's being completely ignored. Some might feel that to be interested in Ronan Point is a little ghoulish, but after half a century almost all the immediate actors in the event will have passed on, and it's an important event in the history of 20th century Britain. It still has resonance.

In fact, it took a little detective work on my part to work out just where the Ronan Point tower had once stood. There were lots of aerial photos taken after the explosion, but this doesn't make it easy to place it because many of the surrounding streets have been rebuilt, often with new alignments. But there are one or two key photos on the web which, together with other useful bits of information, place the tower block exactly. None more so than the one which shows the address of Ronan Point as 85 Butchers Road. 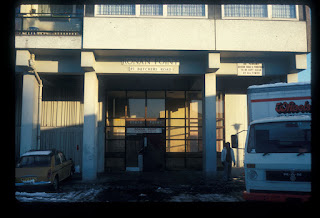 There are others in which you can make out the side streets, Ashburton Road and Fords Park Road, to the west of Butchers Road, which still follow the Victorian street pattern. Butchers Road is the street that runs diagonally across the image below, from bottom left to top right. 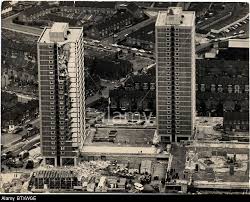 And there is the recorded fact that the site , after demolition, was developed by Barratts in their inimitable 1990s Noddy-style, complete with GRP porch canopies. It's these Barratt houses, arranged in two terraces stretching between Butchers Road and Freemasons Road, that mark out the surprisingly small footprint of the Freemasons Estate. Ronan Point was the westernmost tower. In fact, there is still a No 85 Butchers Road, which marks the entrance of the only Barratt home to face Butchers Road itself, just to the south of the Butchers Road Newsagents. That, near as damn it, was where the tower once stood.

I you are interested in finding out where it happened and, en route, getting to see a fascinating if still deprived part of the East End, the pin on my Google Map marks the spot. It's a 15 minute walk from the Custom House DLR station and an easy side tour for those visiting Excel. 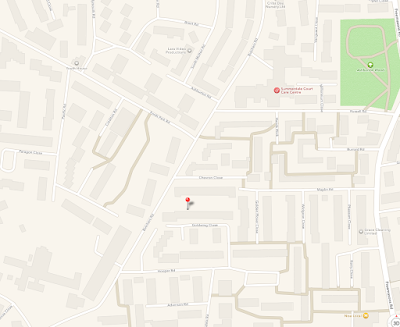 Here are some mood-capturing images I snapped from my iPhone last Sunday morning. 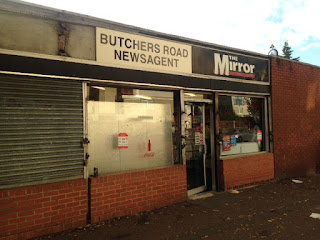 The newsagent is just to the north of the site. Ronan Point would have once towered over it. 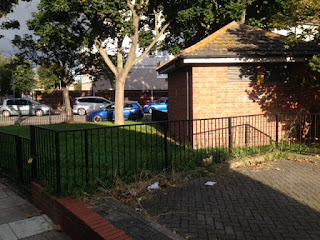 The electricity sub station is on Butchers Road by the entrance to Goldwing Close. It's very close to the site of Ronan Point. 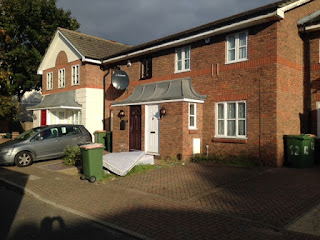 This Barratt house on Goldwing Close is more or less on the spot where the tower stood. These houses are now 20 years old and they haven't aged well.