On Sunday evening last week, I set off to cycle across Cambridge to have supper with Mandy, my partner. As I passed along Trinity Street,  ahead of me I spied a crowd assembling outside Great St Mary's Church, the historic heart of the city, just across the street from King's College Chapel.  I had no idea what was going on but as I slowed down to pass the throng, I saw a man (Richard Murphy, no less) standing on one of the stone benches outside the church talking through a loud hailer. And next to him stood none other than Jeremy Corbyn, who seems in this week in September 2015 to be very much the man of the moment, as he stands on the verge of winning the Labour Party's leadership election. Corbyn had been booked to talk inside the church that evening but the meeting had sold out, so he had decided to do an impromptu talk outside beforehand. A "dress rehearsal", he called it.

So naturally curious, I parked up my bike and decided to see what all the fuss was about. Murphy was batting on about the Peoples QE which sounded to me (not exactly a left-wing firebrand) like he just discovered that money does grow on trees after all. "No need to have any austerity, we can just print some money. They did it for the bankers, we will do it for ordinary people." But such has been the extraordinary economic landscape of the past few years that this left-field approach no longer seems quite as batty it would have done ten years ago. 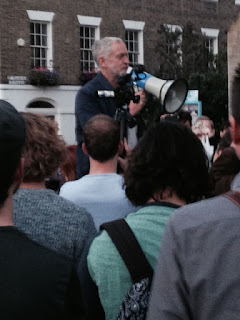 Murphy stood down and up pops Corbyn to a big round of applause - there are maybe 150 people gathered around outside the church The setting is quite surreal. It's a beautiful evening in the heart of a beautiful city: the sun is setting, giving the surrounding stone buildings a lovely warm reddish glow. And there is Corbyn chatting to us like we are a bunch of students on a camping expedition. He comes across like a keen young teacher — some might say overgrown student — talking with us rather than at us and talking very much from the heart.

Initially I am totally dispassionate (being naturally cynical and only a little younger than Corbyn), but I soon find myself warming to him. In fact, after about three minutes I give up resisting and decide that he is actually a very cool guy, very natural and easy with his words and very charming too, in a self-deprecating way. It's one thing to be self-deprecating person-to-person, it's quite another to be able to do that on a public platform and not sound smarmy. Corbyn didn't sound at all smarmy. He might not appreciate this plaudit, but he came across as a real gentleman.

He spoke for about 20 minutes and only referred to a handful of people in that time. One was Peter Mandelson: he rubbished his "I'm comfortable with people making lots of money" quote. Corbyn said he wasn't at all comfortable with it and noted that FTSE directors earn 187 times more than their lowest paid staff. All good 70s radical stuff here, but maybe, just maybe, it rings truer today than it did back then.

Then a strange thing happened. He started talking about the cuts to the health service and social care and referenced a successful campaign to save wards at the Whittington Hospital in Islington, Corbyn's home. This is all good grass roots activism of the kind I grew up on in the 70s but it seemed miles away from the high offices of state that Corbyn is now standing for.

He mentions that he had had a recent conversation with one of the principal organisers of this campaign, Shirley Franklin. Shirley who? No one in the audience would expect to know who the hell Shirley Franklin is. Except that I happen to know her personally, as a friend of a friend and someone we did building work for in the 1980s. How bizarre is that? I'm listening to a man making a pitch to become leader of the Opposition and and he's chatting about someone I last saw at a funeral a few years ago. It felt like I was now sitting in his living room having a chat about the neighbours.

Not that Shirley isn't interesting in her own right. As niece of the esteemed Rosalind Franklin, the unsung co-discoverer of DNA, she has many interesting stories to tell. But this evening in the dappled sunlight of Cambridge churches and colleges, her mention made it a very personal connection for me. As Corbyn stepped down to move onto the main business of his evening, talking in the church itself, I returned to my cycle and pondered on what I'd heard.

If he does win the election, there will be a lot of people out to attack him, many of them from his own party. They may yet make mincemeat of his all-too-idealistic policies, but I suspect they will find it hard land a blow on him for being inconsistent or corruptible. Or boring. Old Labour he may be, but we have long since tired of the New version, so it will be interesting to see how Britain fares with a genuinely different political creed to debate with once more, even if it is a case of dusting off the 1970s agitprop.