Part L and the Fuel Factors

If you want a good example of how contentious and how political the building regs have become, then the fuel factors are a great example.

The aim of Part L is to make our buildings more energy efficient. And the aim of energy efficiency is to reduce carbon emissions. But they are not quite one and the same thing, because one of the big imponderables about energy efficiency is the choice of fuel you use for heating. Each available fuel has a known carbon intensity, conventionally expressed as kilograms of carbon dioxide released for every kilowatt-hour burned. Or kg Co2/kWh, if you like abbreviations.

Now if carbon reduction was your sole aim, you could simply switch to a very low carbon fuel — we are talking biomass here, wood chips, pellets or logs — and not give two hoots about all this energy efficiency malarky. But that sort of seems a little illogical, doesn't it? Just because you chose to burn wood somehow shouldn't mean you can forget about double glazing and insulation. So Part L fuel factors take this into account and assume that no fuel can score better than mains gas.

But what of the alternative fuels? What if you are a rural selfbuilder and you are away from gas mains? Logically, you would think that your building plans would have to take the carbon intensity of your chosen fuel into account. And Part L does just that, via it's fuel factor table. If you want to heat with oil, you have to build to a higher standard. And if you want an electric heat pump, you need to build to a higher standard still. It's all explained in Table 1 of the new Part L, the Fuel Factor Table.

But the increased build standards don't fully reflect the carbon intensity of the various fuels and here is a natty graph to show you what the situation actually is. The true carbon intensity of each fuel relative to mains gas (as defined in SAP 2009) is in blue; the way they are each treated in Part L is in red. 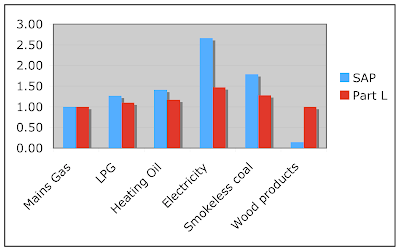 The one that leaps out is electricity which is two and a half times more carbon intensive than mains gas but only gets penalised by 47% in Part L. That's still a penalty, for sure, but looked at another way, it represents (yet another?) subsidy for electric heat pumps.

But — make no mistake — the fuel factor tables don't represent the true carbon intensity of the fuels in question. They come with a very large slice of political meddling.
Posted by Mark Brinkley