If you naively thought that the new Coalition government would put an end to spin, you may be in for a shock. Take garden grabbing. The very phrase is pure spin. Despite this blog now being five years old, you won’t find any mention of this phrase before now. That’s because, until recently, it didn’t exist. We spoke instead of infill plots, because that is what they are. Or were. According to this DCLG news story, they will probably be no more.

So where does this phrase garden grabbing come from? A large finger of suspicion is pointing at Greg Clark, the new Decentralisation Minister (pictured). 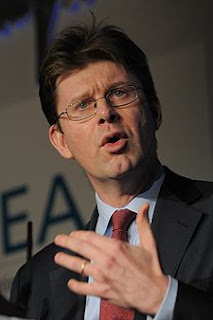 You couldn’t make this up, could you? Just as we are preparing for a round of public spending cuts, they go and invent a new ministry. Clark features in the short video on this site looking rather pleased with himself, as if he has not only named a new curse, but provided a cure at the same time.

Now the selfbuild community is up in arms because back gardens have provided a rich vein of plots over the past twenty years or so, as the supply of conventional plots has all but dried up. For every “block of flats” crammed into back gardens, there are several individually-crafted homes nestled away where you would barely be aware of their existence. Clark’s anti garden grabbing measures look set to stop virtually all development in gardens, not just inappropriate cramming.

Back to the spin. Let’s look at this video a little more closely.

It starts with a printed statement: Over the last five years 180,000 homes have been built on gardens.

Followed by: Roughly one every 15 minutes.

Now how’s that for a warm up? You could just as well state that there are something like 10 million gardens in the UK, and at the current rate of progress it will take 300 years before they are all built on, but that wouldn’t sound quite as frightening, would it? And I have grave doubts about this figure of 180,000, in any event. What the DCLG statistics say is that:

the number of new houses being built on previously residential land such as people's back gardens - up from one in ten to one in four between 1997 and 2008.

Work back five years from 2009 and you’ll find that there were around 750,000 homes built during that time. So, very roughly, 25% of these would equate to 180,000, which is doubtless where they have derived this figure from. But previously residential land isn’t just gardens, not by a long chalk.

Take the 40 sheltered flats just completed next to where I live — see last blog post on Nichols Court. They replaced a few bungalows that were demolished to make way for the new development. This is development on previously residential land but no way can you construe this as garden grabbing — unless of course you are Greg Clark wanting to make a point.

So what is the true proportion of development taken from gardens? I suspect no one can tell, because I doubt the statistics are good enough to distinguish, but common sense suggests that it will be far lower than this 180,000 figure bandied about by Clark.

Clark states that the only reason that garden grabbing has been allowed is that “gardens were classified as brownfield sites.” This is simply not true. Gardens have always enjoyed potential development status: they were included within the original development zones because no one ever thought to exclude them. The framework boundaries were drawn around settlements in the 1950s and 60s, and it was only at this point that any land was ever excluded from development. Garden land was usually included within the development zones because the planners were trying to stop development spilling over into the surrounding countryside, not to stop it happening at all. The original idea was that parcels of land within the development zones — and that included back gardens — should be available for building on, if the owners wished to do so. The greenfield v brownfield distinction is relatively recent – a product of the 1990s – and gardens were never even considered as part of this debate.

The reasons why back gardens have proved so popular for development is two-fold. Firstly, there are almost no small building plots available in some areas, except for garden plots. Secondly, building land is incredibly valuable and the sale of a garden as a plot is a very nice little tax-free earner for the householder.

Back to this pesky video. At 1:15 into the video, up pops Bromley councillor Alexa Michael to give us her take on the horror that is garden grabbing. What she says is revealing. For a start, she says “local” five times in 15 seconds. At 2:23 she pipes up “with the new legislation restoring back gardens as greenfield sites, it will make it much easier to refuse unwanted development on domestic back gardens, so that they can be preserved as open recreational space.” This is pure tosh. Back gardens have never been regarded as greenfield sites, so there is no “restoration” going on here. And there is no way a back garden is “open recreational space.” They are not public parks, they are gardens!

Then up pops Clark again, this time with his ministerial red box, telling us that he is excited by his first decision to change the designation of gardens so that they are “no longer brownfield sites.” Bollocks. What he is actually doing is tightening the development control zones to include gardens for the first time ever. Shout it from the hilltops — he is rolling out the power of the state to include land never previously controlled by either central or local government.

He goes on (at 3:01): “that means local communities will once again get the chance to decide whether they want to keep a particular garden or whether they think it’s better that it should be built on”. What sticks in the craw is the insertion of that little phrase “once again” which suggests that this is somehow returning to a pre-Labour policy that existed in some golden past.

Now we are all wondering what happens next. The pronouncements thus far are ambiguous. On the one hand, Clark is saying that back gardens will be zoned as greenfield sites. That’s planning code for No Building At All. On the other hand, he says that local councils will have the chance to decide whether garden development is appropriate, which is in fact exactly what happens now. You can’t have it both ways.

At the moment, we have some bizarre policies in place in some local authorities where people applying to develop garden land are instructed on what and how much they can build, sometimes being told to build several houses when they only want to build one. But it’s less bizarre than prohibiting garden development completely.

A more sensible policy would be to allow appropriate garden land development, but to raise tax on the windfall profit.
Posted by Mark Brinkley