Whither the Wood Burning Stove? 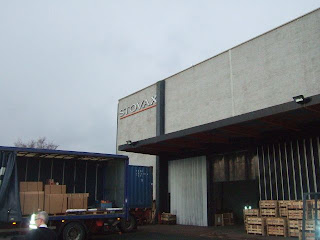 On Wednesday this week I travelled down to Exeter to meet Stovax, making good a promise I made to them six weeks ago. I really new sweet FA about Stovax, other than they made wood burning stoves, and I quite expected a couple of beardies wielding hammers and tongs. How wrong I was. It's now a substantial concern. The business started in 1981 when Guy Brook and his friend Miles Jennings began firstly importing and distributing stoves and then making Victorian fireplaces and surrounds. It's been been expanding ever since, some of it by starting up new companies to produce fireplace products, some by acquisition of related businesses. Stovax Holdings now employs 450 people and has become the largest stove maker in the UK. The business includes several brands: Stovax, Yeoman, Gazco (makes gas fires - does well), Redfyre (ranges) and there is another, now separate, holding company which contains a tiles business called Original Style. "In fact everything to do with fires except hearths," explained Greg Taylor, the technical director.

Greg, it turned out, is in the middle of a selfbuild and he had spent much of the past few months buried in the Housebuilder's Bible. He brought along his copy and it was marked up with post-it notes. My first thought was that I was being ambushed, and that I would be forced to work in the foundry for the next six months until I saw the error of my ways. But of course he was sweetness and light, and actually very helpful as well. I learned a lot from him during our lengthy interview.

• The difference between a wood-only burning stove and a multifuel stove. Wood burns best when laid on a bed of ash with air being injected at it from above. In contrast, coal burns best in a grate with air coming from underneath. Wood will still burn in such a grate but not as well. So a multifuel is basically a coal grate, whilst the wood grates are rather different and would be hopeless for coal. Stovax have seen sales of wood-only stoves rise steadily over the years and now they sell pretty much 50/50 (wood v multifuel).

• Solid fuel stoves can get to around 80% efficiency, but anything beyond this is technically difficult because heat is needed to keep the flue operating well.

• Virtually no one burns straight coal anymore but there are any number of clean or smokeless coals. Anthracite is a naturally occurring coal that burns very clean, but it isn't widely used these days. Instead we usually use manufactured smokeless coal pellets, known as Ancit.

• The Clean Air Act is the legislation behind a number of Smoke Control Areas where it is not permitted to burn wood or coal. You can burn smokeless fuels such as ancit, but if you want to burn wood, you need to get a stove that meets the technically demanding PD 6434 standard, which DEFRA test for in Cheltenham. These "cleanburn" stoves are then passed for use in Smoke Control Areas. It's not an easy test to pass, the cost is around £8,700, and Stovax are currently putting a lot of their stoves through this test. The more efficient a stove is the less smoke there is. "Smoke is unburned fuel" I have noted down: QED the more efficient the stove is, the more of the wood it burns and the cleaner the resulting smoke is.

• One of the keys to getting the best out of a cleanburn stove is to burn dry wood, Greg recommended getting a moisture meter and making sure that you don't burn logs with a moisture content no greater than 20%, preferably 15%. He said in order to get a true reading, split the log open and apply the meter to the middle.

• We are not about to run out of wood as a fuel. There are currently around 285,000 domestic wood stoves installed into the UK, burning around one million tonnes of timber in total each year (that's nearly 4 tonnes each stove, which seems a lot). The Forestry Commission reckons we are have the potential to burn ten times as much timber before we run into capacity constraints. They have in place a "Woodfuel Strategy for England" which should release and additional 2 million tonnes each year by 2020. Which means we are going to have to buy an awful lot of woodstoves in the next ten years if we are going to consume all this extra timber. OK, I know a lot will end up being burned commercially, but still the domestic sector will have a significant role to play.

• Stovax spent three years trying to sell pellet boilers, but the interest was minimal. They have now abandoned the technology (for the time being) and are concentrating on wood-fueled boilers, like....

• The Stockton HB. These are designed to heat hot water for the cylinder and for a number of radiators, but they are still very much focal-point room fires, unlike the utilitarian pellet boilers which ideally need to be sited in a basement. I got shown the labs where they were testing a Stockton 14. At full pelt, it burns 6kg of dry wood an hour but this belts out 14kW to heat hot water for rads and 8kW out of the fire itself and into the room. 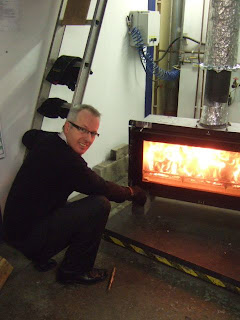 • Greg Taylor (pictured here with the Stovax Studio 2 in the test lab) was keen to emphasise "link up." Link up? It involves adding a woodburning boiler stove to an existing central heating boiler system. The system, through gravity and series of valves, is set up so that the gas or oil boiler switches off when the stove is lit and vice versa. “Link up” allows homeowners to maintain the convenience of a conventionally fuelled boiler whilst also dramatically reducing fossil fuel bills through the use of solid fuel as an extra source of heat and hot water.

“When you get up in the morning or come home from work in the evening, the conventionally fuelled boiler can have warmed your home and given you plenty of hot water. As soon as you have the stove lit, the boiler can switch off until it’s needed again. Add solar panels and your conventional gas or oil boiler will be used even less.”

• There was a sub-text going on here which we didn't really have time to explore, but which struck me afterwards. There is a subtle difference here between a boiler and a stove. You don't really want a boiler in your living room, something I know from personal observation, having stayed in a house with what claimed to be a "pellet-stove" in pride of place next to the TV. It was noisy, ugly and just plain mechanical. So anything which ranks as a "biomass boiler" is only ever going to be of interest to a rich minority who have utility rooms and/or basements, whereas a wood-burning boiler-stove appeals to a much larger grouping. What Stovax are aiming at doing is building kit which looks like a stove and yet acts like a boiler.

• Which brings us back to the Renewable Heat Incentive which is proposing to exclude wood burning stoves but to include pellet boilers at a deemed tariff of 9p per kWh for 15 years. The worked example (on page 50) suggests that this subsidy would be worth over £1,000 a year, £15,000 in total. The logic behind excluding wood stoves is explained on page 31: These present difficulties as it is extremely difficult to monitor how much they are used (they are usually a secondary source of heat, the use of which will be optional), and to what extent they are used with renewable fuel rather than, for instance, coal. Now this second objection could be addressed by making the Stockton and its ilk wood-only rather than multifuel, but the first objection is much harder to address, especially if Greg's linking theory is put into place. Whereas the consumer seems to be saying "we want stoves, not boilers" the subsidies are going to go to the boilers. But, as we have already established, pellet boilers are really only ever going to be of interest to people with relatively large houses.

• In fact exactly the same thing can be said about ground source heat pumps which generally require large gardens. The RHI would seem to be a very generous subsidy for already wealthy people. Next week, I am booked into the government's Renewable Heat Incentive workshop, and I expect some heated exchanges on this very topic. But I digress. the subject of this ramble is wood burning stoves, and this leads us onto...

AIRTIGHTNESS
• We discussed airtight houses and how wood-burning stoves might cope. In theory, it is possible to create room-sealed wood-burning appliances (just as balanced-flue gas-fires and gas-boilers are). In practice, it hasn't happened yet, although Stovax sells optional kits for many of their stoves to take external combustion air directly to the appliance. Current UK regulations (Part J) require that there must be an additional supply of air from inside the house for any stove over 5kW but as houses become tighter this regulation will need to change for new houses. Wood burning stoves do not yet have an agreed technology to make them fully room-sealed. There are some room-sealed prototypes being made in Germany but nothing yet in commercial production. So the future of wood-burning appliances in near-Passive House standard homes is as yet uncertain, but at the moment, if you aspire to build a Passive House, you can't have a stove in your living room.

• We touched on the issue of ventilation and just how complicated it is becoming. Apparently, wood stoves tend to work fine when the house is under positive pressure, but react badly to negative pressure. This makes sense, doesn't it? So designers of ventilation systems need to be aware if a wood-stove is planned.

I hope this is a helpful guide to where things stand re: woodburning stoves. It's not a topic I have any great expertise in, and I welcome feedback from anyone with something useful to add.
Posted by Mark Brinkley