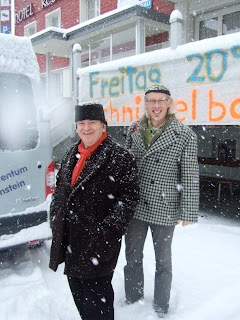 Last week I went to Switzerland on a big shiny Airbus as a guest of Just Swiss. I went with two esteemed architects, Meredith Bowles and Roger Zogolovitch (pictured here in the snow, Roger on the left) and we were shown round a site of ultra low energy apartments called Silence, a window factory, two houses under construction and a very state-of-the-art factory timber frame housebuilder called Schoeb. All very interesting stuff, and the Swiss we met were incredibly enthusiastic and, well, just plain nice. It snowed heavily and it all looked like a winter fairy land. Great trip, great way to spend 36 hours in January.

Meredith and Roger were looking at potential partnering arrangements with Schoeb and had a couple of rather more detailed discussions than me. I got a more personal tour, showing how this business had grown from a joinery workshop in Walter Schoeb's garage to become Switzerland's most successful factory house builder, completing around 60 units a year. That's still small by German standards, but compares in scale with UK housebuilders like Oakwrights. Their semi-automated production lines were humming away with Hundeggers and Weinmanns beavering away — I have seen a few of these operations now — with just two or three people overseeing the construction of walls, floors and roof panels. Schoeb are interested in building in the UK and have set up an office in London. They will also be at EcoBuild as part of the Just Swiss stand, so if you want to find out more, check them out there. My impression was that their system is very robust, very well thought out, but may prove to be rather too expensive for the typical UK client. Only those wanting quality — or perhaps a Passive House solution out of a box — need apply. Interestingly, the cost of shipping from Switzerland to the UK only adds around 5% to the factory gate prices: the heaviest component is the timber which has to be imported into the UK in any event.

Some random points of interest. The Swiss have their own energy saving performance standard called Minergie. It comes in various format. Standard Minergie, Minergie P (roughly equivalent to PassivHaus), Minergie P Eco (with other sustainability features like water saving) and Minergie P Eco Plus (with added renewables). Obviously, this system is never going to be of interest to anyone other than the Swiss; it's all rather like the Code for Sustainable Homes in this respect. Yet another reminder as to how good it would be to have a supra-national standard that everyone could understand.

Switzerland seems to be in love with heat pumps. But then their electricity is relatively low carbon, with a mix of nuclear and hydro, including some pumped storage schemes — they do seem to have rather more hills than we do here in East Anglia.

The low energy apartments, called Silence, featured something I hadn't seen before. Phase change glass. GlassX is the name. Apparently, the architect of the apartment scheme, Dietrich Schwarz, happens to be the CEO of GlassX, and therefore has the wherewithal to specify his product because he is the architect. Does this strike you as a little bit unusual? Or maybe that’s usual in Switzerland. 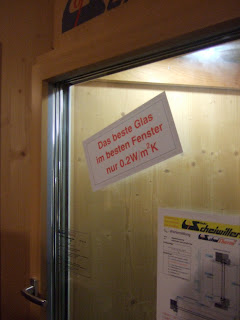 And on the visit to window manufacturer, Scheiwiller, I saw my first bit of quadruple glazing. Here's my picture. No drooling over the 0.2 U value glass please. The Swiss really seem to be having a love affair with huge patio doors and in the Scheiwiller workshop, there was a beast that was 5m long and 2.3m high, triple glazed and weighing in at 400kg when glazed. It is so big that it will have to be re-glazed on site because it won't be possible to lift in into place with the glass in. I'm not sure such enormous glazing units are really such a good idea. The MD of Scheiwiller told me that triple glazing first appeared in his workshop in around 2004 and it has grown steadily since then. Now around half of all his work is triple glazed, and he sort of expects it all to go to triple before long. Hence the appearance of quadruple glazing.