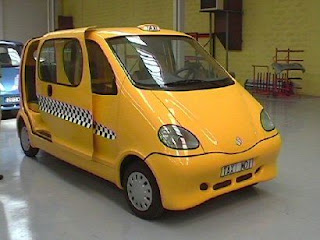 There is an almighty schism in the sustainability movement. On one side are the hair shirts, insisting that salvation lies in a low impact lifestyle with much less consumption and much, much less travel. On the other are the techno-fixers who believe, or at least hope, that we can continue business much as usual and that we’ll soon sort out ways of creating energy without releasing CO2 all over the place.

Most official policy and indeed most green organisations pay lip service to both sides of the debate. Thus we should become super energy efficient AND we should start to generate renewable power. Nowhere is this more evident than in our de facto manifesto for the future of housebuilding, the Code for Sustainable Homes, where Code Levels 1 through 4 are all about conserving energy whilst Code Levels 5 and 6 call for us to create it as well.

One of the great unspokens here is that we have as yet no idea how much green power we are capable of producing. The hair shirt argument rather relies on the notion that carbon-free electricity will be in short supply and that we had better get used to conserving every joule. But it is quite conceivable that this may not be the case and that if we get our act together we could generate far more green electricity than the world could ever need. If such a scenario was to be played out, it would make many of the other sustainability arguments redundant. Or at least highly questionable.

Take planning as an example. In recent months, I have sat in on several lectures about sustainable urban design and every speaker I have listened to has been at pains to emphasize the importance of getting away from car dependency. In this respect, the USA is always held up as the prime example of how not to do it (think Los Angeles and its hundreds of miles of gridlocked freeways) and medieval Europe (especially places like Tuscany) is shown as the way to go. But it goes deeper than this. The car itself is the enemy, not just for the fact that car use burns mega amounts of carbon, but also because it destroys communities by enabling everyone to shop at out of town malls and supermarkets. This in turn pulls the rug out from under the feet of small independent stores, thus making traditional town centres unattractive. This in turn leads to people driving everywhere, which in turn, leads to problems like obesity. It’s all interconnected, and it all leads back to the car.

The problem for urbanists, who want to get us all back on our bikes and back into trains and buses, is that the car is just so damned convenient. And for most of the past fifty or sixty years, we have been building our economies around the notion of car use. It’s going to be incredibly difficult to wean us away from cars.

But think how much harder this would be if cars were to become part of the solution to climate change, rather than its main bugbear. Some of the techno-fixers can see exactly this scenario taking shape in years to come. How come?

The answer lies in the use of car batteries as an energy store. One of the main problems — in fact THE main problem — with renewable energy is that it only operates in fits and starts. On a windy day, for instance, we may conceivably draw all our energy needs — and more — from wind turbines, but that won’t get us through days without wind. Similarly, solar panels don’t work too well in the dark. What we’ve been lacking to date are credible storage methods which would be able to tide us through the times when renewables are contributing very little energy. Some have suggested that rather than building hundreds of giant batteries, or maybe pumped reservoirs, we might instead be able to use millions of small batteries which would be capable of taking and returning a charge to and from the mains. Every home would have a tray of these rechargeable batteries, acting like some huge energy internet. And, furthermore, these batteries could double as power sources for electric vehicles, which in itself would act as a considerable incentive for people to install them at home.

Say each house had maybe a dozen batteries plugged into the mains. If you wanted to go out in your car, you would take one of the batteries from the tray, drop it into your car in a special battery slot, and drive off. It might only work for an hour, so if you wanted to go further, you would have to stop at a battery garage and swap your empty battery for a full one. Not only would there be enough charge in all these batteries to keep 20-odd million electric cars on the road, but also to keep the nation lit and heated during the long hours of winter darkness, not to mention a week or two of calm, overcast weather when the big renewable power plants weren’t generating.

Science fiction? Probably, but the techno-fixers other solutions (e.g. mirrors in space, pouring iron filings into the oceans) are arguably even more implausible. By 2025, we might (just) have migrated to electric zero-carbon cars and motoring might no longer be seen as the No 1. bogeyman in the battle against climate change.

The question is what effect would this have on the great sustainable planning debates? If cars switched from being one of the main drivers behind climate change to being one of the main solutions, wouldn’t this tend to make the move towards sustainable urban settlements look just a little hollow? Would we suddenly be able to start building in the countryside again? Would out-of-town shopping centres be back of the agenda? Would the idea of eco-towns be dead in the water? Or will the obesity issue have become so all engulfing by then, that cars will still be regarded with suspicion?
Posted by Mark Brinkley