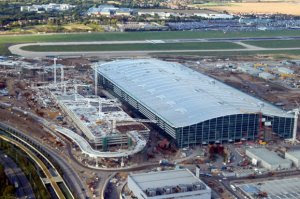 News has reached me of the fantastic efforts BAA have been making to help preserve the environment at Heathrow’s Terminal 5, due to open in March 2008. It’s taken the sustainable approach to building very seriously.

Terminal 5, which is so big that it is actually three terminals, designated 5A, 5B and 5C, will use two separate water systems, one for drinking and the other for toilet flushing and irrigation. Water for the second system will be sourced from an in-house rainwater harvesting system, topped up with a borehole supply. They hope to be able to collect and re-use 85% of the rain falling on the terminal catchment area.

In addition, all the bathrooms will have dual flush toilets, and the taps will have on-off sensors combined with aerated flow. BAA trills that it aims to reduce the demand from the public water supply by up to 70%.