If you want a good example of just how complex low-energy housebuilding can be, take a peek at window ratings. Glazing is unique in this environment in that heat can flow both ways through it. Whilst at night, heat radiates out through the glazing, during the day and particularly when it’s sunny, substantial amounts of heat passes into the house. Over the course of a year, a south-facing window is often a net energy contributor. Because of this, the traditional way of measuring energy efficiency, the U-value, becomes just a little shabby when dealing with glazed areas, because it only deals with heat loss.

Now a few years back, some bright spark had the idea of introducing an energy-rating scheme for windows, just like the ones you see on fridges and washing machines, ranging from A (excellent) to G (not so excellent). They have been running schemes like this in North America, Australia and New Zealand but Europe has been slower to adopt. However, at long last it has got underway and there is now a body known as the British Fenestration Registration Council (BFRC) that has got the ball rolling in the UK.

The window rating system looks at three aspects of performance.
• The U value (or heat loss) of the window assembly
• The g value, or solar gain
• The L value, or air leakage of the assembly 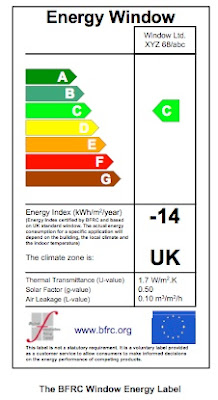 Now the g value bit is interesting because the amount of heat admitted into the house obviously depends on the orientation of the window. A south facing window will absorb far more energy than a north facing one. How can you reduce this to a single value? I think they fudge this and assume it’s east or west facing, because they have to come up with a constant in order to make a comparison. Interestingly, the very low U values windows (which are sometimes triple glazed) tend to score rather poorly on the g values and it is felt there may come a point where an ultra low U value fails to make any appreciable difference in heat loss terms. Hell, I warned you it was complex.

Anyway, by hook or by crook, the BFRC have come up with a system that supposedly takes all of this into account (you can read more about it on their website if you are so inclined) and reduces all this conflicting data into just seven categories.

The very best windows, the A rated ones, are reckoned to be net heat contributors over the course of a heating season without having to be mounted in the south face of the house. When the BFRC originally set up the scheme, they didn’t anticipate there being many A rated windows, at least not for many years but the scheme has only been running 18 months and already there are loads of As, so much so that it’s beginning to resemble the A level results from Jade Goody’s comprehensive. The question is now arising as to whether the standards have been set too low.

Sliding sash windows are dealt with in a separate category and thus far only one firm, Masterframe, have bothered to submit their products for testing and their best rating is a C. It is not thought that it will ever be possible for a sliding sash to get an A rating, because of the design constraints.

Now whilst this haul represents a fair number of windows that have been submitted to this entirely voluntary scheme, it does make you wonder whether there is much point having an F or a G rating. This is hardly going to be a selling point for a window, especially as the building regulations, revised in 2006, call for minimum rating of D on new work or E on replacement windows. If an F rating is a fail, what is the purpose of having a G rating?

Looks like the scheme itself will have to be re-rated. Anyone for an A* or even an A***?
Posted by Mark Brinkley