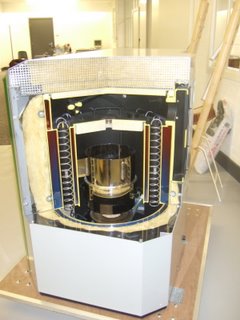 To Welshpool, to take a look at Europe’s most advanced pellet boiler. I am guest of Andy Buroughs and his company Organic Energy. Andy Buroughs has been in the renewables business for 20 years, mostly in solar panels, and has recently got interested in pellet boilers after visiting Austria and tracking down Okefen. He has become the UK agent for Okefen and also for another Austrian company, solar panel maker Gasokol.

Now the Okefen pellet boiler is a very impressive piece of kit. I instinctively feet that a pellet boiler is a sort of upmarket wood stove but I am surprised to see just how upmarket a wood stove can get. This is, as Andy points out, the Mercedes of wood-fuelled boilers. It doesn’t actually burn the wood pellets, it gasifies them and then burns the resulting gas at something like 93% efficiency. As there is as much heat value in a wood pellet as there is in heating oil, by weight, you can see that it is a very efficient method of extracting heat from wood. And, of course, the pellets aren’t shovelled in by hand: they are fed in automatically by an auger or a vacuum tube (you choose). And the grate doesn’t need riddling out every morning – the residue can be cleaned up once every few weeks. Indeed, on a forthcoming model, available sometime in 2007, things should have moved on to such a point that the proud owner of an Okefen pellet boiler can get by with an annual visit from someone who a) delivers a year’s worth of pellets into the hopper b) empties the ash can for the year and c) carries out the annual service.

Wow, that really is hi-tech. Renewables without tears.

However there is a big ask here. The cost of the kit comes to around £12,000. From this you can deduct a £1,500 grant from the Low Carbon Building Programme, but even so, that is a ball-achingly large amount of money for what is, after all is said and done, a boiler. This price would include the pellet hopper arrangement but doesn’t go anywhere downstream from the boiler itself. No hot water tank, no radiators or underfloor heating system.

The Okefen is competing with such kit as oil boilers — cost maybe £2,500 including storage tank— and ground source heat pumps — perhaps £8,000 up to £10,000. OK, you get to burn a green fuel, unlike the alternatives, but even if pellet supply turns out to be as cheap and as plentiful as promised, it is never going to stack up financially. One of the very first things Andy said to me was that the Okefen “was very much an aspirational product.” I didn’t quite understand what he was on about until I got home and processed all the cost information. Now I see what he means. It’s a hell of a big ask.

But I have no doubt that there will be a number of well-heeled selfbuilders who will see the Okefen and fall in love and just have to have it. It’s a bit like that. It may even become the Aga for the Zero Carbon generation.