I think I know a lot about housebuilding. I have been involved in residential building since 1980, I have worked on site as a labourer, carpenter and joiner, roofer, electrician, plumber, groundworker, even a bricklayer occasionally, in fact every damn job there is except plastering. I have managed small building projects, have restored old buildings and built new ones. I have been a developer and seen the highs and lows of the property market through the 1989 recession. For the past ten years or so, I have written about the process and visited hundreds of selfbuilders, suppliers, professional builders and architects, really broadening my horizons in the process. I have lived and breathed the whole process for all but five years of my working life.

But every now and then I meet someone who makes me think I actually know very little. One such person is Alan Teal who I had the pleasure of visiting on December 15th. I know him through his contributions to the selfbuild forum where he has been an active member for ages, but I had never met him in person until he appeared at the Smartlife Green Day event at the beginning of this month. It was there that I arranged to visit him in his lair. 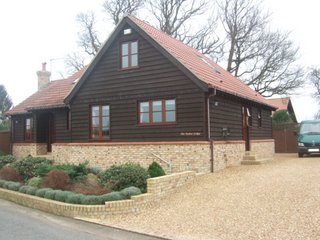 And what a lair it is. Situated in a small village, just outside Huntingdon, Alan has built the entire complex himself. Even the doors and windows have been made on site, in his workshop. Sure, it’s taken him ten years but what’s the hurry? He has also been working as a joiner and kitchen fitter, working out of the garage block, which he built first back in the 1990s. He hasn’t borrowed a penny: everything has been funded out of cashflow from his joinery business. The only help he seems to have had is from his long suffering wife and that only on an occasional basis.

In his past, Alan built two houses for fun when he was a construction student in Yorkshire. He worked for Bryant Homes for a while as a setting out engineer and saw at first hand just how plc housebuilders go about their business. And he has worked in the USA as well, and knows just how differently the Americans build their homes.

Like many other bright people working in construction, Alan is close to despair about the low standards found in the UK. This in itself became a reason to take on the development of an entire site single-handedly. “You can either do things properly for yourself, which takes forever. Or you can employ others to do it for you and spend your time trouble-shooting instead.” He chose the slow single-handed route. “Never again, it just takes too long.” Actually, it doesn’t appear to have been that bad for the pair off them. They started by constructing a small flat above the garage where they lived in cramped comfort for the duration: it’s now a valuable self-contained unit. He then set about getting planning permission for a house on the site – it had been sold off by a Cambridge College as a derelict workshop. Then he undertook the entire construction project, including making his own scaffolding. It’s still not quite finished — the upstairs room-in-the-roof is yet to be fitted out — but even so the attention to detail is amazing. 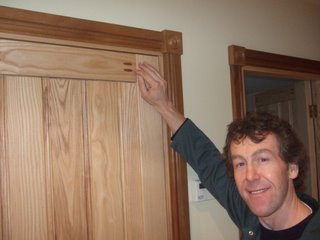 The photo here shows Alan pointing out the novel method he used to make his own ash doors, using countersunk angled screws to build the frame. “I haven’t got a morticer in my workshop so I thought I would experiment with what you can do with angled screws. I have filled the screw holes with a dark coloured wood (iroko) to highlight the effect. It’s been very successful – I haven’t had any movement from the doors at all. So I have made a houseful of solid ash doors for £60 each.”

I love this sort of attention to detail. And the infectious enthusiasm of the people who engender it. I also envy the level of skill involved. In the years I worked as a builder, I always worked as part of a team and used to rely heavily on other’s people’s knowledge and goodwill. I would never have had the confidence – or bloody-mindedness – to build a house on my own like this. And yet in the past few years I have met a number of people who have risen to this particular challenge and have usually achieved spectacular results. I think Alan Teal ranks for me as the most single-handed selfbuilder I have yet come across but he’s far from unique and, as I am finding, there are a more people out there who would love to emulate him. But it is always very slow, very demanding and can be pretty lonely as well: it’s not for the faint-hearted. But it can be done, as Alan’s example shows.
Posted by Mark Brinkley