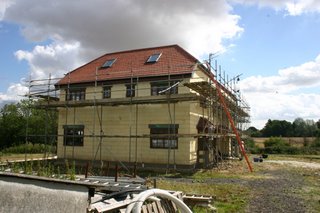 There is an ingenious way of building walls using polystyrene and concrete. You use the polystyrene as formwork to build up the walls into the shape you want, then you pour concrete into the formwork and, voila, you have a structural wall with insulation already built in.

These systems, and there are several, are known generically as Insulated Concrete Formwork (ICFs). They are not new and they haven’t really made the splash that their proponents had hoped for, but there are signs that the market for ICF systems is at last coming alive. In the UK and Ireland, there are now about a dozen active promoters whereas five years ago it was basically just one. And there are indications that the crucial developer market is at last coming on board and seeing the potential of building homes with ICFs.

What are the plus points?
• It’s a quick building method – comparable with timber frame
• It’s semi-skilled
• It’s simple: the number of elements needed to make up an external wall are greatly reduced
• It can be cheaper – if you restrict your choice of external wall cladding to pre-coloured renders
• You get fantastic insulation levels
• Other benefits include good airtightness and soundproofing


And the negatives?
• The headline price, usually around £30 per m2 for the polystyrene formwork, plus £10 per m2 for the readymix to fill it, puts a lot of people off. You can construct a blockwork wall, labour included, for around £20 per m2, so why would you want to start with a wall system that costs twice as much? I know one or two people who have got as far as this and no further. But if you compare finished wall costs, it looks very different. A fully finished brick and block wall with insulated cavity costs between £80 and £100 per m2. An ICF really shouldn’t be any more than this and if finished with an external render should be less than £80 per m2 overall.
• Pouring the concrete is critical and can be a little bit scary. Building with ICFs may be “semi-skilled,” but it’s definitely not unskilled. There is a knack, which you have to learn. The walls wobble about and you have to be confident that you have your bracing just right.
• Bursts. It’s not difficult to overstress the formwork when pouring concrete. This can cause the formwork to split open and for the readymix to spill over onto the ground. It looks worse than it actually is and it’s part of the skill to know how to handle the odd burst without panicking. But it doesn’t look good and it contributes in no small part to a negative perception of ICFs.
• Concrete. Although all the ICF promoters sell their systems as a green method of building, they can’t get away from the fact that concrete is not perceived as a green building material. Far from it. It is regularly subject to scathing attack from environmentalists and is blacklisted from many deep-green projects, along with all cement-based products. Personally, I think this is a ridiculous state of affairs, especially as these projects almost always promote the questionable use of lime as a replacement for cement. But nevertheless, these perceptions count. Concrete is just not sexy, in the way timber, glass or handmade bricks are sexy.
• Neither, for that matter, is polystyrene!
• Not so much thermal mass as thermal mish-mash. I have written recently on the blog about the perceived joys of thermal mass as a method of storing passive solar heat and evening-out temperature fluctuations. I remain somewhat sceptical of the wilder claims made by thermal mass advocates but the problem for ICF walls is that the concrete is insulated by the polystyrene casing both inside and out, so it’s not readily available to admit heat radiation. Thermal mass fans find this incredibly frustrating, so much so that I know of at least one project where the architect instructed the builders to peel off the entire inside layer of polystyrene after the concrete had set and to then stick it onto the outside. Inelegant or what?

Summary
I have written at far greater length about the negatives than I have about the positives. If word counters measured opinions, you would surmise I am therefore broadly negative. But that’s not so. It really doesn’t bother me that ICFs are made of concrete, or that the thermal mass is compromised by the insulation, or that headline price looks high, or that they are not quite as easy to build with as you might initially think. In July and August, I visited two ICF sites, one a selfbuild and the other a 25 unit development, where the respective builders were both chuffed to bits with their decision to use ICFs. The selfbuilder was particularly instructive as he was a carpenter by trade and you would have thought he would naturally have gravitated towards a timber house. But no, he wanted full control of the project and he wanted to undertake virtually every trade himself. As he put it, “I’d rather just do it myself than spend time explaining to someone else what I wanted them to do, only for them to do it wrong.” In fact, the skills of a carpenter are far more appropriate for ICF builds than the skills of a blocklayer, which they are designed to replace.

It remains to be seen just where ICFs go from here. As the regulations demand more and more insulation, it becomes increasingly challenging to work this into the standard cavity wall routine and builders become more open to novel format like ICFs and SIPs. At the moment, you can still build with a 100mm cavity and pass muster with Part L but the next version may require a 150mm cavity and that is stretching it some. At that point, we may suddenly see a really big switchover to ICFs, especially by those builders who instinctively don’t like timber based wall systems. Ireland has already seen a significant take-up of ICFs, but there it seems to be more about meeting the seemingly insatiable demand for new homes by whatever means available. In the UK, the new homes market is very different.
Posted by Mark Brinkley