The Shutters of Old Nice

Nice is famous for its shutters. They form an integral part of the streetscape in the old parts of town, as they do across much of southern France, but in Nice the intensity of the Mediterranean light plus the combination of the pastel shutter shades with the earthy wall colours makes for a quite stunning spectacle. Consequently, the shutters appear on the cover of guidebooks and in countless postcards and have become icons in their own right.

The shutters aren’t just for show. They are immensely practical and are a good example of what we once called appropriate technology, essentially a low-tech solution to a problem, in this instance how to keep cool in a hot climate. The Brinkleys have just spent a week in the apartment I part-own in Nice and, once we mastered just how to get the best out of the shutters, the rooms stayed cool and fresh all day and all night, despite the daytime temperatures peaking in the 30s.

The apartment has a high-tech Daikin air conditioning system and for the first couple of days we played with it incessantly, trying to get it to work perfectly. But air conditioning can be, and often is, frustrating to live with. To get it to work well, you have to close all the windows, but if you then leave it on for a long time, it is easy for the air temperature to drop too low. If you leave it on in your bedroom whilst you sleep, you risk waking up two hours later freezing cold. Even if you manage to get the temperature right — and there are temperature adjustments you can make on the handsets — it is still just a little too noisy to make sleeping easy and, additionally, the air quality isn’t that great because its being recirculated. You keep wanting to throw the windows open to get some fresh air, but of course that defeats the logic of air conditioning.

By Day Three, we had worked out how to get comfortable at night without any air conditioning, just by using the shutters. The shutters have three modes, as illustrated by my photo here, taken from the rear of the apartment. 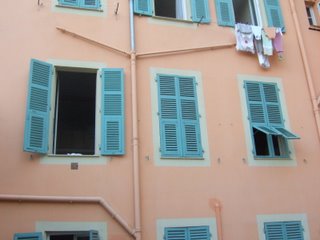 • Open: lets the light flood in. This also harvests solar energy and heats the apartment in spring and autumn. In the heat of August, this didn’t concern us.
• Closed: keeps the sun out in the heat of the day, provides privacy and blocks out enough light to enable sleep. In addition, a metal hook locks the shutters into the closed position and thus provides security.
• Closed but with bottom flap open: keeps the hot sun out during the day but maximises ventilation.

The trick we learned was to open all the windows and close all the shutters during the night. Additionally, the internal doors had to be left open. This created a controlled flow of air from front to back, enough to keep the apartment cool and fresh throughout the night. No night sweats and no freezing butts, just hours of uninterrupted sleep. In the morning, the fresh bread smells from the bakery downstairs wafted up into the apartment. Bliss.

I can’t say for sure, but I believe that most of the older Nice apartments have been built this way, designed to use the shutters to control ventilation in this fashion. My guess is that this natural form of air conditioning would suffice in all but the most extreme heat waves.
Posted by Mark Brinkley