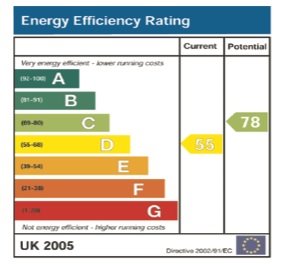 On June 14th, our dear poppet of a Housing and Planning Minister, Yvette Cooper, announced that the forthcoming Home Information Pack (HIPs) will have to include an Energy Performance Certificate (EPC), which will rank the energy use of all houses for sale from A (good) to G (awful), just like you see washing machines ranked in Comet. It is, as you might just suspect, yet another European Directive being put into effect here. By 2009, all homes for sale in the EU will have to have energy certificates, but Yvette is keen to make us in England & Wales early adopters.

Like many Labour policies, it sounds like a good idea in principle, but you can’t help wondering if it will turn out to be so in practice. Undertaking a detailed energy-use calculation is a complex and time consuming process, and whilst it sort of makes sense when building a new house (though many would argue against this assertion), it is a pretty pointless exercise with an existing dwelling. Why so?

For a start, you have to know how the house is built. How is the home inspector going to know what the construction actually consists of? Are the cavities insulated? There may be visual clues, there may not. Sometimes the homeowner has no idea, or they may be simply lie about it. There is no sensible check that can be carried out without ripping the fabric apart, which I suspect is not really what a home report is designed to do. What is the efficiency of the boiler? Will the home inspector even know what boiler it is, let alone its efficiency? You can really only make the vaguest stab of a guess at the U values of the fabric and the efficiency of the heating systems in existing buildings, so the results of these home energy reports are likely to be quite inaccurate.

An alternative approach might be to have a look at recent fuel bills. Sounds like a much simpler way of assessing the energy requirements of a building. Unfortunately, this is one area where energy ratings come unstuck, because there are huge variations in outcomes, depending on how each house gets “driven.” Just as the fuel consumption figures on new cars don’t equate with the mileage you actually get, so the energy ratings don’t have much bearing on the actual fuel bills. You might, for instance, be a family of seven and use ten times more hot water than a single person in an identical house. Or you might have all your thermostats set to 26°C and keep the heating on all summer and the windows open all winter, as opposed to other homes that are only used sporadically. So previous fuel bills are not a good guide to future ones.

So it’s back to energy ratings, calculated painstakingly from the all the different surface areas and various other details. But even when they are done accurately, the information they deliver is not always relevant. For instance, a large house is going to use more energy than a small one, even though they may be have been designed for a same number of beds. Energy ratings are worked out on a square metre basis, not per bed, so the large house could well have a better energy rating than the small one, yet use significantly more energy both overall and for each occupant. That’s a conundrum that can’t adequately be addressed by energy ratings. They are a crude tool, at best.

So what we are likely to end up with is a certificate that doesn’t tell you a great deal that isn’t bleedin’ obvious. Old houses will be penalised with bad ratings because they were built with little or no insulation and no double-glazing. 21st century homes will probably score B or C. If the boiler is new or has been replaced in the past two or three years, the rating will go up one band. And the A band will be left for state of the art houses built someway ahead of the building regs requirements. You can pretty much tell this without having to go to the trouble of employing someone to work it out for you.

So maybe these certificates will be worth obtaining for their educational value? Maybe people need to be made more aware of the likely energy costs associated with a house purchase. Well, yes, this is a point that Yvette is keen to emphasize. Let’s make everyone aware of their carbon footprint — that’s the way to bring about changes. Hmm…possibly. But a point the minister was much less keen to emphasize was the cost of this “educational exercise”, which will be borne by the house seller as part of the Home Information Pack (HIPs), due to come into effect in 2007. The government’s own estimate of the costs of these HIPs is around £600-£700 plus VAT per house: that’s payable just to put your home on the market. There are aspects of the HIPs scheme that I think are going to be good: specifically, getting together a log book of building work and planning permissions, which should speed up the sales process. But I can see that obtaining an Energy Performance Certificate from a trained assessor will not be popular. It will, at a guess, make up 30% to 50% of the cost of the HIP and it will tell the new homebuyers almost nothing that they couldn’t work out for themselves. It’ll be educational for sure, but I suspect the people getting the education will be the ones currently working for Yvette Cooper.
Posted by Mark Brinkley