Is ElectroSmog poisoning us all?

I have been writing about health hazards in the home ever since I have been writing about housebuilding. Which is a long way of saying 12 years. But I have, to date, avoided getting worried about ElectroSmog. The best-known example of this is the controversy about the high voltage power lines, proximity to which is said to be a cause childhood leukaemia. Extensive studies have been made of this phenomenon and they are, to date, inconclusive.

We live about five miles from the Pelham to Walpole overhead power line. It’s a 400kV monster of a line, the largest size the National Grid operate, and I regularly walk the dogs along various paths running right under it. The way I figure it, if the electro magnetic field (EMF) running beneath these power lines is that strong, you would see the effects on the plant life growing under it. But you don’t. The rape fields, for that is what is mostly grown around here now, are the same colour and height all the way across and the hedgerows don’t seem to suffer any adverse effects at all. 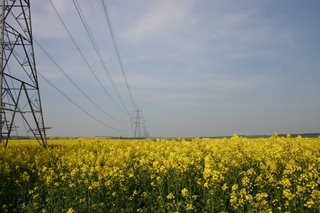 In my rather lazy way of thinking about it, that seems to be conclusive. I have therefore pigeon-holed ElectroSmog as “Yet another groundless health scare” or “yet one more thing to get worried about, don’t we have enough of these already.”

But in Monday’s Daily Mail (12/6/06), an article appeared entitled Choked by the ElectroSmog which took a look at the myriad of low level radiation sources that we all get exposed to in the home. Not just the obvious ones like mobile and cordless phones, but also microwaves, induction hobs, plasma screen TVs and electric blankets. The article is by Alasdair Philips who runs an organisation called Powerwatch, which monitors and lobbies about these issues. He is also a director or a company called Sensory Perspective which makes EMF detection equipment. Oh, and he is co-author of The Powerwatch Handbook. He is an expert, for sure, but arguably not an independent voice, as he has vested interests in promoting EMF as a health scare. So is he a visionary or a charlatan?

If I understand him correctly, he is pointing the finger at two different effects. The first are electromagnetic fields (EMFs) emitted by electrical appliances and cables and fluorescent lights and dimmer switches. These are localised versions of what happens under the high voltage power lines. The second effect is microwave radiation emitted by microwave ovens, mobile and cordless phones and any wireless technology such as Bluetooth or Airport. Philips bundles them all together and calls them ElectroSmog. He also ranks them in order of danger from 0 – 5:

Our household has an abundance of high scoring appliances. Should I be worried? I’m not losing any sleep just yet. It’s all very well quantifying the danger on a scale from 0 to 5, but this is a classic case of a denominator without an enumerator. Is a score of 5 actually dangerous? What is the actual, rather than the relative, risk? What is the cigarettes-smoked equivalent? This is where Philips, for all his undoubted expertise, is at his weakest because there really is no way of quantifying this risk. Yes, these are all new or newish phenomena that we are being exposed to and it would be foolish to dismiss any anxiety we may have about the long-term risks of such exposure, but the reality is that there are scores of other new products, drugs and experiences that are as potentially damaging as EMF and microwave radiation. Here’s another list for you:

Theses have all appeared in the past two or three generations and most of us are exposed to a great number of them a great deal of the time. We know that none of them strike us down instantly but then neither does lead poisoning or exposure to asbestos or smoking cigarettes. The question is are they insidious killers like these, long term bad news. In short, are they safe?

And what about combination effects? What about the dangers of using a mobile phone next to a rape field in May whilst wearing deodorant and being on the pill, swigging mineral water from a plastic bottle?

On the one hand we are living longer and healthier lives. On the other hand we are suffering from a surfeit of new and unpleasant conditions. Here’s another list.

These conditions are all at record levels and seem to be increasing inexorably. Why? People think there must be some environmental connection, but you can’t begin to isolate the causes because there are so many and they may well, in any case, be interdependent.

So as far as I am concerned, ElectroSmog is just another in the long list environmental factors to be aware of but not afraid of. I sort of think it comes with the territory of 21st century living. But, of course, only time will tell. It may well kill me. After all I spend far too long sitting exactly 500mm from a computer screen, which I feel sure is far too near. Above me is a fluorescent light, to my right a DECT phone, to my left a mobile. I’ve had enough of this. I think I’ll go and cook some lunch up on our induction hob.
Posted by Mark Brinkley