At last: a Passiv Wood Stove

In the rarified world of Passivhaus design there has been a small problem gnawing away at many enthusiasts, especially the selfbuilders. Wood stoves. They may not need them, but they want them. Focal point fires. Comfort. Neolithic TV. Call it what you will, but fires have a certain pull. And a pellet boiler just won't do.

There are — or have been — a couple of problems. One is that you need so little heat in a Passivhaus that the smallest wood stove is still too big. It's hard to make a wood stove that doesn't emit at least 4kW of heat, because that's what a log gives off when it's burning well and it seems a bit pointless to start burning kindling. That's not too big an issue — after all, as Passivhaus devotees keep saying, you can always open a window to make the room a bit cooler if you get too hot. Or you can start using the stove to heat hot water — but maybe not, as here things start to get a little bit more complex.

The next issue is the fresh air supply. Opening that same window is not really an acceptable failsafe option. And you can't fall back on the traditional, permanently open, ventilation grill — not when you've gone to so much trouble to make the place so airtight in the first place. In a draughty old pile, it's not really a problem because there is plenty of fresh air coming at you from all corners, but in a Passivhaus that's not the case. The supply air problem is usually addressed via an air duct piped directly into the stove. It's still not ideal, as it creates a cold bridge with the outside and another potential air leakage path — remember, all penetrations are bad news. But it's sort of on the right lines. It makes the stove room-sealed.

But another niggly little issue concerns spillage, the term given to the cloud of smoke emitted from the stove every time you open the door to re-load. In a draughty old pile, it quickly gets lost in the background, but in a Passivhaus the smoke will hang around until it's drawn away into the MVHR system, where it will end up clogging up the filter.

Well, as it happens, Chesney's, the wood stove manufacturers based in London, have just come up with a spillage-free stove design. Nigel True, their stove wizard, (pictured) 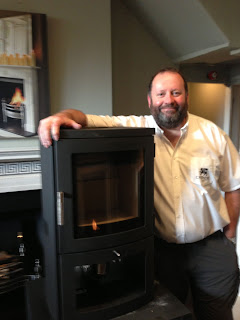 has been beavering away in his Whitstable workshop and has hit on a spillage-free design. "Until now, the best solution on the market has been a stove with a hinged door with an automatic closer," he told me. "We've come up with a design which diverts the air intake when the door opens so that the supply flow is redirected from an opening under the door into the stove, and away up the flue. It doesn't smoke at all"

The idea for a Passiv stove came about when they were contacted by CenterParcs with a view to supplying stoves in all their Passivhaus-standard chalets at their yet-to-be constructed Woburn site. The contract itself came to nothing, as CenterParcs later lowered their spec on cost grounds, but Chesney's carried on with the project and have now launched the resultant stove commercially. Its been through rigorous testing at Gastec in Cheltenham (the place where all UK good wood stoves get tested for smoke emissions) and has emerged with distinction. Both carbon monoxide and carbon dioxide emissions were rated as "negligible" even when subjected to worse case scenarios — i.e. forgetting to close the door.

At present, the new design has been fitted into a fairly basic 4.6kW Milan stove. It's being marketed under the name of Milan Passiv and the retail cost will be around £1150 plus VAT, which is around 25% more than the regular Milan stove. This puts it down at the lower end of what people pay for new wood burners.

As it happens, Passivhaus stove enthusiasts may have another promising development on the horizon. Poujoulat, the French chimney and flue manufacturers, are about to launch a triple-walled stainless steel flue which will work in conjunction with Chesneys new stove range. The advantage of a triple-walled flue is that the external cavity becomes the the stove intake air supply, in a the way a balanced flue works on a gas boiler. Not only does the intake air get pre-heated as it's drawn down the flue (thus increasing combustion efficiency), but the extra vent hole for supply air is eliminated. Instead of two penetrations, you have one: music to the ears of Passivhaus builders.

As of now, I don't think this product is yet on the market, but according to James Parkin, their UK technical manager, it's coming soon and anyone interested should contact him at j.parkin@poujoulat.co.uk
Posted by Mark Brinkley