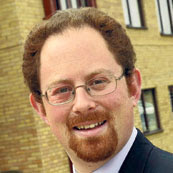 But has he thought it through at a philosophical level? His bill may be democratic, but it's hardly liberal.
Posted by Mark Brinkley