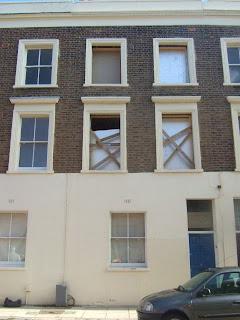 Yesterday, I joined a small group viewing a PassivHaus refurb in Princedale Road, Holland Park, West London. It was another Retrofit for the Future job, this one with a budget of no less than £172k. We are in Kensington & Chelsea here, Britain's wealthiest borough, where even the social housing is worth millions. And you'll not be surprised to learn that this was social housing, owned in this case by the Octavia Housing Association. There are apparently 83 such projects going on up and down the land at this moment, keeping a fair number of sustainability-minded consultants in business through the dark days of 2010. They are all social housing projects, the idea being to work out just how far you can go with green refurbs without any budget constraints.

Which immediately begs the question, what's the point? The whole project has a certain fin-de-siecle feeling about it, especially as today is the day when the public spending cuts are to be detailed. Money like this will, in all probability, never be available again. I expect it will show that you can deliver truly low energy housing on a limitless budget, but as already discussed on this blog, that's not really a terribly useful conclusion at this point in time.

OK, at this point many people chip in with the Economies of Scale argument. It goes something like this. "If we started doing this sort of job by the tens of thousands, then the costs would fall dramatically. We would have teams of builders and consultants who really knew their stuff, and the component prices would tumble. It would be win, win."

Unfortunately, the Holland Park job does little to support such an argument. It is an immensely complicated conversion, painstakingly designed, argued at length with the planners, and slowly being pieced together by the most patient of contractors. 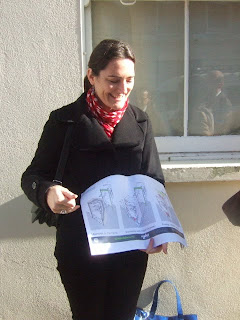 reckoned that it would be impossible to meet the stringent airtightness levels with sliding sashes. Marion decided it would be preferable to build triple glazed windows that simply looked like sliding sashes. It's not that unusual - the big joinery manufacturers have been turning out kit like this for years.

But the planners had other ideas. Conservation area — must be genuine timber sliding sashes. So an almighty ding-dong ensues, familiar to many people who live in nice old houses and want to undertake renovations with a sustainable theme. Heritage lobby v environmentalist. You'd think they would be singing from the same hymn sheet, but they aren't, they are poles apart on issues like this.

Eventually, Marion sort of held sway. What she has come up with is a set of triple glazed windows that the builders have made themselves, and which look for all the world like Victorian sashes, complete with brass handles, but which perform like German tilt and turn windows. Well, the bottom half does: the top half is a fixed light. If ever there was a clash of cultures, this was it.

Other aspects of the job were similarly complex. Threading the ducting for the MVHR unit proved to be thoroughly fiddly, and almost every room in the house has some odd-shaped ply boxing in it to conceal the ducts. The massive insulation has been applied internally, and this has included the party walls on either side, which has significantly reduced the room sizes. There was a lengthy discussion amongst our group about whether it was easier to insulate internally or externally: the truth is that neither is remotely easy. Oh, and the water storage: there's two tanks, totalling 500lts of stored hot water. Sort of thing you see routinely in Switzerland or Germany in a large basement, but in 3-bed terrace in Holland Park? That's really stretching it, methinks.

So I came away full of admiration for the work undertaken here by the team, but also acutely aware that this sort of job just can't be rolled out across the nation's housing stock. Not only is it absurdly expensive, it's also incredibly taxing, way over the competency levels of the average small builder. We have to be realistic about this. What the future holds, none of us can know, but I'd put a bloody big bet on this sort of project never getting beyond the demonstration stage.
Posted by Mark Brinkley