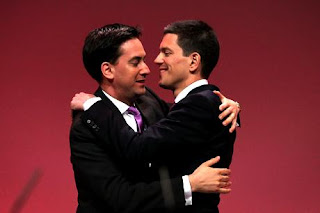 Ed Miliband has featured on this blog before, when I questioned his integrity as Minister for Climate Change during the Copenhagen summit in December 2009. It struck me at the time that he was a disingenuous chancer, and subsequent events seem to have born this out.

He's grabbed the main prize, the Labour Party Leadership, by selling out to the unions, stabbing his brother in the back in the process. Now I can't look at him without thinking he's a poisonous shit, and I wouldn't trust him to run the tombola at my village fete. Instead of electing a new leader, the Labour Party stage managed a public humiliation of epic proportions, and I suspect the ramifications will reverberate for a long time to come.
Posted by Mark Brinkley