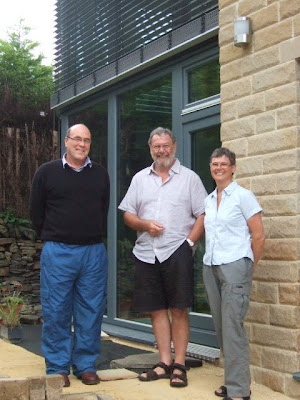 Seven months on from my previous visit, I take a day out to travel up to Denby Dale in Yorkshire to have another look at the now nearly completed PassivHaus, the home of Geoff and Kate Tunstall, and to meet the builder, Bill Butcher (pictured left). The three hours in their company passed very quickly, much of it spent over a delicious lunch. What did I learn?

• Passivhaus is a very technical subject. Every time I dip into it, I learn a little more and realise that there is also a lot more I don’t know and/or don’t understand. The basic tenet - to reduce space heating requirements to a minimum - is common sense, but getting there requires a fair bit of discipline and a fair bit of science. Things like where in the wall you should place the windows, how you stop wind washing over and around insulation, and just how big a hole you are allowed in a Passivhaus to get that airtightness down below 0.6. (in fact Denby Dale came in much lower, at around 0.3).

• One of the big delights of the Denby Dale Passivhaus is that it’s a cavity wall construction, with most of the heavyside materials coming from the local builder’s merchant. Some sceptics said it couldn’t be done as a cavity wall construction, but here’s the living proof. It is probably the only one like this in the world (though there may be something similar in Northern Germany where cavity walls are also used). Bill had to design a number of details to get it to work, most notably the insulated aluminium cappings on the outside of the windows. 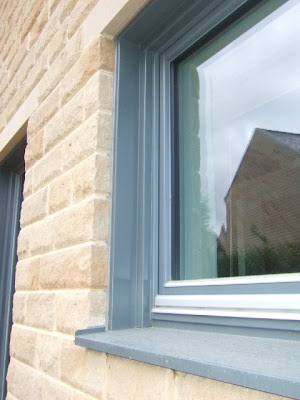 • Since the Denby Dale house has received a lot of publicity, the Green Building Store has been approached by a number of people who would like to “build a Passive House” but already have plans drawn up and agreed. You can’t realistically do that, because once you put the plans through the PassivHaus Planning Package, there are almost certainly big changes going to happen. The advice is to start out with the aspiration to build a PassivHaus, and to have the initial design work put through PHPP at the outset. PassivHaus is integral, not a bolt-on.

In fact, the suggestion was that if you are really interested in building a PassivHaus, you could do much worse than go on a one day course run by the PassivHaus trust, and take your architect along with you.

• Cost and certification. The cost of "going Passiv" consists of two parts. One is the extra cost of using specialised materials, triple glazing, added insulation, etc. The other is the added consultancy fees. These can vary enormously depending on how the scheme has been conceived and who is driving the design. If the architect is already up to speed on PassivHaus, it's probably no more than five days extra work to make the design sing, but if the client or their chosen designer already have strong ideas of what they want and the result has to be Passified, it will be a much longer process. Experience suggest it could take 15 - 20 days, and the cost could easily be £5,000 to £10,000 extra. The final step, certification by the PassivHaus Institute, costs around £1500.

As you can see, it's not easy to say exactly how much it costs to build a PassivHaus, or how much extra it might cost over and above building to conventional standards. Yes, it’s expensive. But what we are really talking about here is quality control. If you don’t certify, then how do you really know you are getting a PassivHaus? If you do, you get a plaque like this. 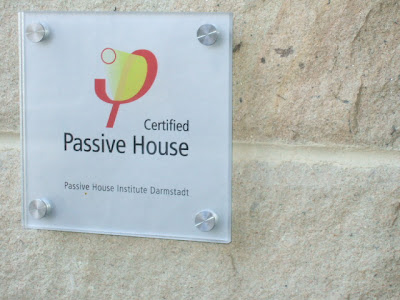 •MVHR systems. I discovered that they need pre-heaters as well as post-heaters. The pre-heaters are there as frost protection because when the incoming air falls below -4°C, you start to get problems with frost in the heat exchangers. In Germany, a lot of incoming air is put through earth pipes which act as pre-heaters, but this can be much easier to do with a basement, something usually absent from British homes. It was felt at Denby Dale, this was not a practical or cost effective solution, so a small electric pre-heater has been fitted, controlled by a frost stat.

• Wood stoves? Passivhaus are not homes without heating, but they are efficient enough to be able to rely on small post-heaters placed in the MVHR system - effectively turning the MVHR system into a warm air heating system. So you don’t need a wood stove. However, many people want a focal point fire, and we had all seen examples of Passiv Houses in Germany and Austria that had wood chip or pellet boilers with flues. Just how you manage to incorporate such a beast within a Passivhaus and still get the required air tightness test is something that remains a bit of a mystery.

Bill suggested that alcohol stoves might be a way around this issue. I’d never heard of alcohol stoves before: if you google alcohol stoves, you get links to camping gear, but apparently in Germany you can buy alcohol-fired indoor stoves which don’t require any flue.

• PassivHaus probably works best with contemporary-styled homes. Think clean lines, hard surfaces, minimalism. Wood stoves? probably not. Cat flaps? I don’t think so. Letter boxes? Mounted on the outside wall please. You need to learn to drive a PassivHaus. Know when to open windows, know when to boost the ventilation system, know when to change filters. It’s not difficult, certainly no more difficult than getting your head around a car’s climate control system. But you do perhaps have to start thinking of your home as a machine for living in. You can’t just start knocking it about, adding new bits here and there. This may in fact be one of the major criticisms of PassivHaus - it’s not readily adaptable. Even things like running a cable through for a satellite dish, or a new phone line, are frowned upon. Sure, you can do what you want to your PassivHaus but it will cease to be a PassivHaus if you mess it around. Just like it will cease to act as a PassivHaus if you sleep with the windows open.

So building a PassivHaus is a lot of trouble to go to if you don't respect it's integrity. However, the one really big plus for PassivHaus is that it works, and has been shown to work over a large number of buildings. Whereas it is beginning to look fairly simple to build to a performance metric of around 45kWh/m2/a, to get right down to 15kWh/m2/a requires discipline in the design, attention to detail in the building and co-operative, willing residents.
Posted by Mark Brinkley