What I learned at the BBA

Yesterday, I made good a promise to visit the BBA where I was the guest of Alan Thomas, the Sales & Communications Director, a stalwart of 25 years standing and, for many, the public face of the BBA.

The BBA is the largest and most important of our Third Party Accreditation bodies. It began life in 1966 (as the Agrément Board), a time when a lot of new (mostly plastic) materials were appearing in the construction industry and there was a perceived need to establish which of them were fit for purpose. It changed name to the British Board of Agrément in 1982 and today employs around 140 people, based at the same site near Watford that plays host to the BRE.

What did I learn?

• Relations between the BRE and the BBA have never been as close as was originally envisaged when they came to share the same site. They got distinctly frosty a few years back when the BRE bought WIMLAS, Wimpey’s accreditation body, and began offering a rival service. But recently, the BRE have chosen to pull out of this market and to concentrate on other things, so perhaps a thaw can take place.

• One of the things that Alan was keen to talk about was the Microgeneration Certification Scheme (MCS) which underpins the Feed-in-Tariffs and the Renewable Heat Incentive. It’s being run by Gemserv and, by all accounts, it’s becoming a bit of a rubber-stamping exercise, as there is so much kit out there that it is simply impossible to test it all thoroughly.

Hence the BBA sees a gap in the market for manufacturers and installers wanting to differentiate their products from the rest, by offering the additional security of BBA approval. The BBA have a team of inspectors out there who take the trouble to visit the Chinese factories where much of the PV is coming from and their aim is to sort the wheat from the chaff. Alan said to me: “We’ve been testing some of the PV systems coming into the UK and finding that there are issues: for instance, flashings that won’t last five years. We found one that can actually catch fire.”

• As well as microgeneration kit, they are currently testing dozens of new insulation materials. The BBA are one of only two places in the UK with a guarded hot box (the other is the National Physical Laboratory) and they are able to test the U value claims of various materials using it. 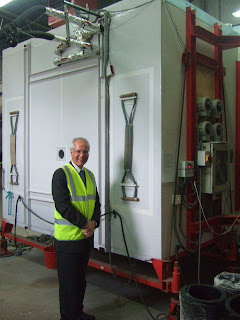 Here is Alan Thomas pictured outside one of the BBA hot boxes. But U values are but one aspect of the tests. For instance, sheep’s wool has to be tested to see if it’s insect repellent and whether it reacts with metal fasteners which it might come into contact with.

• There seems to be a marked reluctance for window manufacturers to use the hot box testing to evaluate thermal performance. Most windows coming onto the market today in the UK publish performance U values which are therefore untested. Contrast this with Germany and Austria where testing is far more common. “There are 8 hot boxes in Vienna alone,” I was told. Sounds like a great opening line for a new Katie Melua song.

• Harmonised European testing remains as far away as ever. I must admit I quickly got lost in the alphabet-soup of CE markings, EOTA and ETA and BS EN nos. In theory, we should be getting pan-European standards, but in practice it seems that the member states have a long way to go to agree on this and it only applies to a very few areas so far.

• Which brings us onto another issue, Technical Barriers to Trade. Or to put it another way, is all this testing and certification there to protect consumers, or to create expensive obstacles for foreign competitors? This came to the fore recently when the revision to Part G of the building regs was held up for several months because a number of cylinder makers felt that the safety requirements being introduced were in excess of anything called for elsewhere in the EC, and the government was challenged in the European courts over this. Our govt won the day and now we have some very restrictive safety requirements for our cylinders (look at G3).

To be fair to the BBA, it’s an argument that they can’t win, as every safety inspection ever made could be said to be a “restraint of trade” by someone or other. All they can do is to carry on testing as well as they can, and hope that both manufacturers and consumers value their acumen.

• I asked Alan if the BBA had ever been successfully sued. His brow furrowed a little and he sucked his teeth and thought about it, and then replied thus: “It’s not a question I’ve been asked before but I think I can honestly say that we haven’t.” I must admit to being rather impressed at this point. He added that they didn’t exactly want to crow about it because to do so would be to invite some litigious sole to take them on, but even so it does rather suggest that they may be quite good at what they claim to be doing.

• And the BBA is not short of customers. They currently certify something like 1300 products and charge anywhere from £10k to £50k for approvals, which take anywhere from 3 months to 15 months to research and test. A BBA Certificate provides a route to market for manufacturers which might otherwise prove difficult: a building inspector or an insurance company will happily play ball with a BBA-approved product or system, whereas they may baulk at allowing something new and untested. Which is exactly what the idea was in the first place, back in 1966 when it all started.

• What’s just as interesting is that many companies succeed with new products without getting BBA approval (or any other 3rd party accreditation). There is no compulsion to get innovative products certified so it becomes a purely commercial decision for them. They have to weigh up whether the widely recognised acceptability of a BBA certificate is worth the time and expense. Some very well known names do: others don’t. Subject for further investigation, methinks.

• I asked at what point do products become so accepted that they no longer require certification. There is no hard and fast answer to this but Alan pointed out that, back in the 60s, timber frame was seen as so new that many manufacturers sought accreditation. Today, it’s become generally accepted. We discussed whether the same might happen with SIPS: Alan thought it might, but not yet, as the systems available all appear to be subtly different. He also suggested that many SIPS manufacturers were investigating whether to switch away from OSB to using Magnesium Oxide boards instead.

• The multifoil debate still bubbles away in the background. There is no doubt that TRADA’s approval of Actis, back in 1997 (was it really that long ago?) remains controversial and damaging to the whole certification business because it involved a very public falling out over how products should be assessed. The BBA has sided with the hot-box theorists (aka the BR 443 establishment viewpoint) and won’t approve multifoils for use on their own – though it accepts an increasing number to be used in conjunction with more conventional insulation products, and there was plenty of evidence of multifoils going through the testing processes at their labs.

• You can search for current BBA certificates here.
Posted by Mark Brinkley