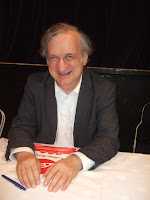 The talk was put on by the AECB, who also used the spot to promote their CarbonLite standard which is closely based on PassivHaus principles. What wasn’t explained was why the AECB should be supporting a different standard. Perhaps it will all become clearer to me in time.
Posted by Mark Brinkley