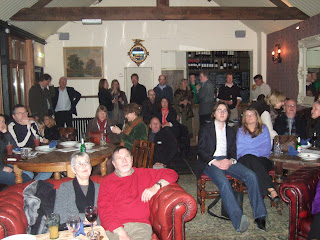 What are these people watching? It’s a Wednesday night in a pub in Cambridge, above me is a large plasma screen and there is European football on ITV and Sky, but no, they are not watching the footie. The Brit Awards are also on featuring Sharon Osbourne swearing at Vic Reeves, but they aren’t watching that either.

They are all gathered here to watch Grand Designs. Could this be the start of a new trend? The subject of the programme was an extraordinary house being built on a steep hillside in Bath and this particular group was brought together by Baufritz who supplied the above ground parts of the structure in the programme. Being a super efficient German housebuilding operation, they were pretty confident that Kevin McCloud was going to be complimentary and they invited a group of friends, prospective clients and staff along for beer and nibbles.

So were they over the moon? Or sick as a parrot? “Too much of the programme was spent on the groundworks” was a frequently heard observation, along with “Tiffany was magnificent” and “I never knew a staircase could be a thing of such beauty.” And no doubt about this result: England 0 Germany 2.
Posted by Mark Brinkley