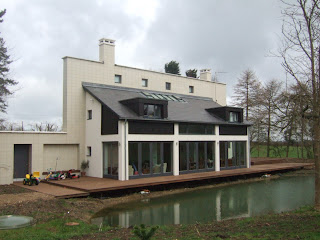 If you are the head of an organisation that champions good design in housing, you can’t really build box. But David Birkbeck, director of Design For Homes, has ended up pushing the envelope out of the bathwater. He and his wife Clare are just completing a truly heroic selfbuild, pictured here, nestling in a hollow in the Essex countryside, not far from Stansted Airport.

I have visited the site a few times over the past four years but today is my first visit for 18 months. Although they have been living there for well over a year, it still bears all the hallmarks of an overstretched selfbuild: there are still lots of things to be done.

However, it looks fantastic from the outside and it’s not bad from inside looking out either. But this morning David is full of the woes of selfbuild because there are a number of niggly little snags which remain unresolved. A lot of the problems stem from the fact that the house is built around this enormous free-standing spine wall. The structure is in fact a series of lean-tos, built off this wall. The wall is made up of some shiny white building blocks, imported from Germany, which are held together with a glue mortar, rather like the thin-joint blockwork systems.

No one in the UK had ever used this building block system before and rather unsurprisingly it hasn’t been plain sailing. The joint between the lean-to roof and the wall is failing and no one is sure just why. Did the architects design the detail badly? Did the blocklayers leave gaps in the mortar allowing rain to penetrate into the blockwork? Or was the roof detailed poorly? Or could a missing vapour barrier be the culprit? It is notoriously difficult to diagnose damp problems and the diagnosis is even more problematic when the materials being used are unfamiliar.

David seems naturally keen to decide what the problem is and to then get the culprits to fix it at their own expense. But this in itself may prove difficult because, like many selfbuilders, David has acted largely as his own contractor, hiring in trades as and when needed. Paul Rogatski from Hanson was with us and he made a telling comment: “If you are working with materials or systems that are new to everyone concerned, there is really only so much design you can undertake beforehand. You have to work out a lot of the details onsite.”

It reminded me of a witty little aphorism I had heard a couple of years earlier (I don’t remember where): “The water gets in through the gap between the design and the workmanship.”

It’ll get sorted. Eventually it’ll be all just so and the leaks will be forgotten. In the meantime, a project like this serves as both an inspiration and a warning. If you want to try something different, be prepared for lots of grief along the way.

OK, you know that already. But sometimes it doesn’t hurt to repeat it.
Posted by Mark Brinkley