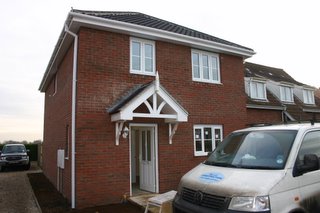 I have selected a new benchmark house for the 7th edition of The Housebuilder's Bible, which is due out in September 2006. It’s the smallest house I have yet worked with and in many ways it’s a back-to-basics structure, a four-square box with very little embellishment, finished to a pretty basic standard. It’s builder, Mike Capp, is working up some of the costings figures for me over the next few weeks but he assures me it cost between £60k and £70k to build.

I’ll be writing at length about this house in the next edition so I don’t want to go into too much detail here. But it makes an interesting case study in itself in the year that the government has sponsored a House for £60k competition. To qualify, the house needs to be at least 76.5m2. My benchmark house is 110m2 internal floor area. It appears, cost-wise, that it would cream it!
Posted by Mark Brinkley